"Prints" by Torch Theater Company at the Minneapolis Theatre Garage 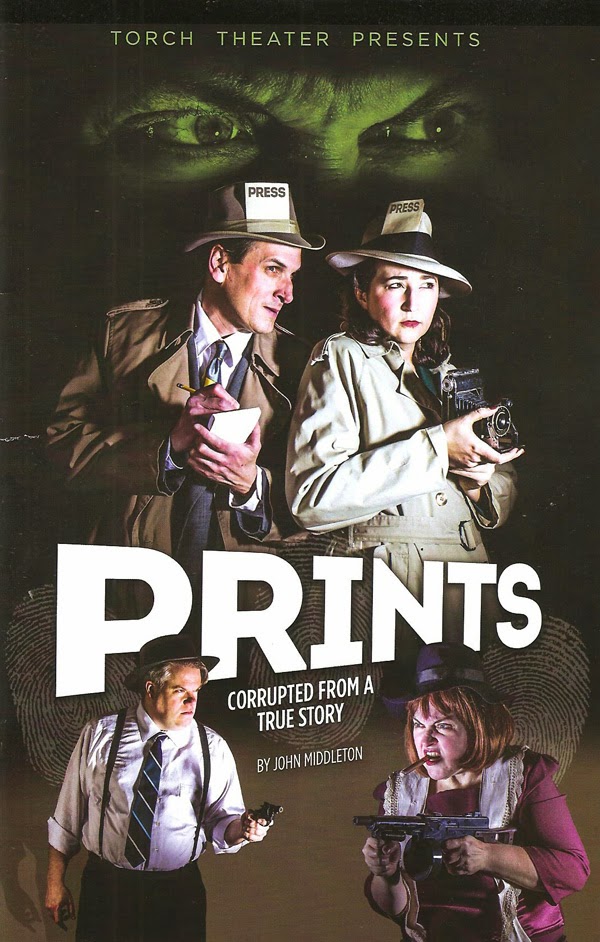 This has been a most excellent week of theater. I saw five shows (four plays and one musical), and each was so different from the rest but so wonderful in its own unique way. I truly experienced the breadth and depth of the Twin Cities theater community this week, from a lovely and intimate two-person musical, to an intensely dramatic historical play, to a funny and poignant play about small town Minnesota, to a wildly inventive new fairy tale. And capping it off is Prints, a sharp and funny new play written by local actor John Middleton and presented by Torch Theater Company (their first production in over a year), brilliantly acted by the company of eight, "corrupted from a true story" about the kidnapping of Minnesota beer tycoon William Hamm in 1933.* I couldn't have asked for a better conclusion to this most excellent week of theater.

The story in Prints features a mishmash of facts from the true story of the Barker-Karpis gang, along with completely made up bits designed to tell an entertaining story. And it works. We view the kidnapping through the eyes of two reporters who are asked by the kidnapped man's daughter Pearl to help investigate. They soon decipher that it must be the work of the infamous Barker-Karpis gang, and work with a corrupt cop and the Hamm family to try to prove it and find Hamm. The FBI gets involved and applies the brand new "Silver Nitrate Method" to pull fingerprints off the ransom note (this part of the story is true). Meanwhile, on the opposite side of the stage, the gang is holding poor Mr. Hamm hostage and trying to figure out how they're going to get out of this mess.

The highlights are many and include:

Welcome back Torch Theater Company, don't be gone so long next time! This is a great example of why the Twin Cities theater community is so stellar - a new play by a local playwright, an ensemble of individual talents who work well together, and an all around high quality production. Playing now through March 8 at the Minneapolis Theater Garage, with discount tickets available on Goldstar.

*This is not the first show I've seen on this topic, see also History Theatre's Capital Crimes: The St. Paul Gangster Musical.