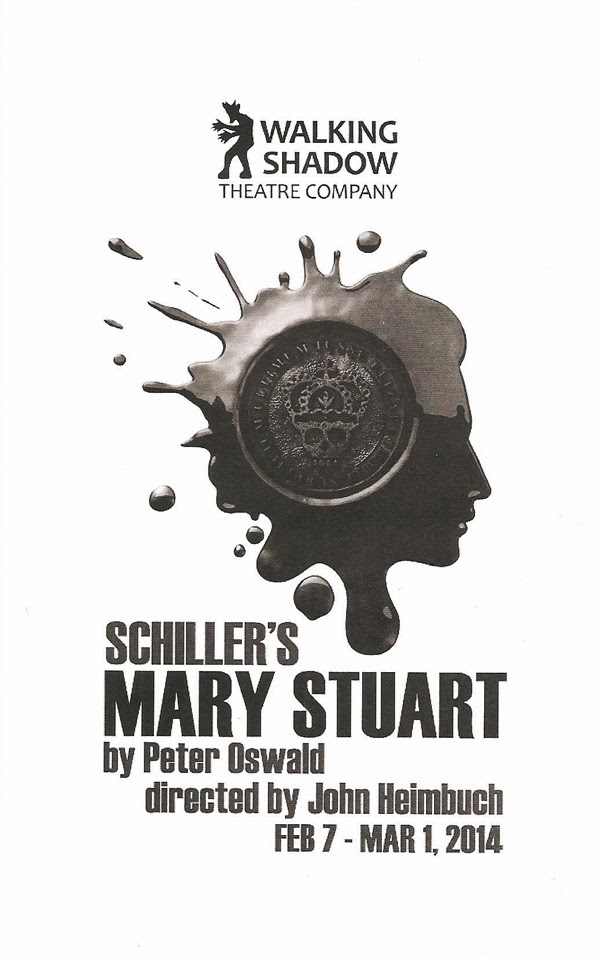 There's nothing crazier than the history of the British monarchy. The complicated line of succession in the Renaissance era is an example of "truth is stranger than fiction." The many instances of murders, coups, beheadings, declarations of illegitimacy, and incest constitute more drama and intrigue than any soap opera ever could. Therefore it's great fodder for historical fiction today (e.g., the recent miniseries The White Queen) and in times past. In 1800 German playwright Friedrich Schiller wrote a play called Mary Stuart about the Scottish queen, who was imprisoned by her cousin Queen Elizabeth I because she was a threat to the throne. Walking Shadow Theatre Company is presenting a new adaption of the play by Peter Oswald, and the result is a delicious and hearty meal.

Queen Mary comes from a troubled past - ascending to the Scottish throne at 6 days old, growing up in France, married to the king until his death, and returning to Scotland, where she might have had her new husband killed and then married the man who killed him. After this latest scandal, she sought sanctuary in England with her cousin Queen Elizabeth, but because the Catholics of England saw Mary as the rightful ruler, Elizabeth had her imprisoned for nearly 20 years. This play takes place near the end of those years, as Mary pleads for her release and Elizabeth debates Mary's fate with her advisers. Over the course of nearly three hours, we watch the schemes and politics of these two queens unfold and crumble, until only one is left standing. It's really quite gripping, and it doesn't feel like a 200 year old play about events that happened 400+ years ago, but rather feels fresh and dramatic and almost modern.

The best part of this production is the excellent acting by the entire 13-person company. It's such a treat to just sit there and watch the skill of these artists as they play out this complicated tale. At the top are Jennifer Maren and Sherry Jo Ward as the Queens Mary and Elizabeth, both strong and regal and sympathetic, so that I found it difficult to choose sides between the two. Jean Wolff is wonderfully Mrs. Hughes-like as Mary's staunch supporter, friend, and ladies maid. Other standouts include Adam Whisner as Mary's firm but ultimately kind captor, and Dustin Bronson and Peter Ooley as Mary's (or Elizabeth's?) suitors.

The second best part of this production are the gorgeous costumes, which are not 16th century period costumes, but have more of a mid-20th century classic look. The men are dapper in suits and hats, but the women truly shine in stunning dresses. I love it when a dress comes out and takes my breath away with its beauty, and that happened several times in this play (costumes by Lori Opsal). Michael Hoover's classic and simple set design of multiple arches and opaque windows is a perfect backdrop for the complicated story and large cast.

Schiller's Mary Stuart is not a short play, coming in at nearly three hours with intermission, so be prepared for that. But it's a gripping, fascinating, and intriguing true(ish) story about two powerful women, with excellent performances by the entire cast. If you're an Anglophile, or if you just like great drama, this one's for you (playing now through March 1 at the Red Eye Theater, with discount tickets available on Goldstar).