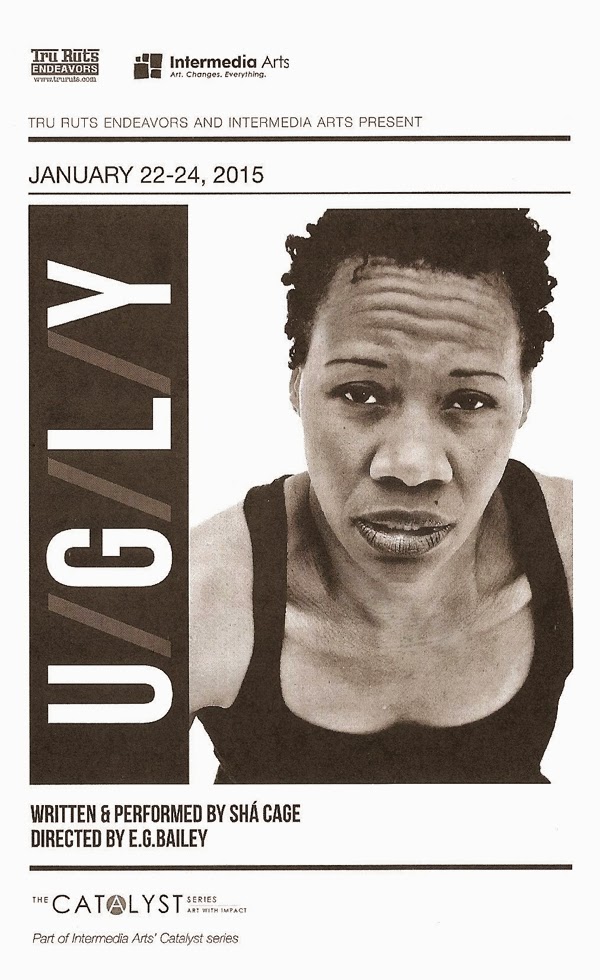 Accomplished local actor Shá Cage is presenting a three-part series of original works around the idea of identity. Last night I was fortunate to witness the world premiere of the second piece in the series, entitled U/G/L/Y, at Intermedia Arts as part of their Catalyst program. It's a truly unique and original creation, combining the arts of movement, storytelling, music, video, poetry, and visual art to explore the idea of beauty, particularly in women, particularly in women of color, but relatable on some level to all of us who live in this world. Shá's performance is, as always, powerful and moving, and she leaves the audience with plenty to think about.

Shá tells the stories of many women, easily slipping into their skin and bringing each of them specifically to life on stage. The stories are varied, some playful, some devastating, all told with the rawness of truth. At first it's a bit unclear on the surface how all of the stories relate to each other, but in the end they all sort of fall together to inform this idea of ugly vs. beautiful, ideas that are really just social constructs most of with struggle to break free of on a daily basis. The piece also incorporates video of women speaking about what they see and think when they look in the mirror, thoughts which are their own yet feel universal. When we look in the mirror, our eyes are typically drawn to our flaws, things that other people might not even notice. But as the women in the video look deeper, they are able to see the beauty in themselves beyond the supposed flaws.

I was completely fascinated watching Shá create little pieces of art on the floor with what I thought was sand, but later learned is actually grits (I'm from Minnesota, I don't think I've ever seen uncooked grits before). I have no idea what it means, but it's beautiful to watch. She also uses movement and dance, the rhythm of speaking, recorded voice, and a live violinist (Katherine Pehrson, with recorded music by Chastity Brown) to further develop the theme. This is more than just theater, it's performance art. It doesn't all make sense from a literal viewpoint, but it's not supposed to, it's supposed to engender thoughts and feelings and emotions, which is exactly what it does (judging from my own reaction as well as the very responsive audience).

It's interesting that this show is playing the same weekend that Park Square is opening The Color Purple, a story about a woman who is told she's ugly from the time she's a young girl. Through her long life journey, she's eventually able to recognize and own her own beauty, identity, and place in the world, singing "Most of all, I'm thankful for loving who I really am. I'm beautiful. Yes I'm beautiful, and I'm here." Shá's piece speaks to this same idea in a really unique and profound way.

Only two performances of U/G/L/Y at Intermedia Arts remain, after which it will embark on a world tour.