"These Old Shoes" by Transatlantic Love Affair at Illusion Theater 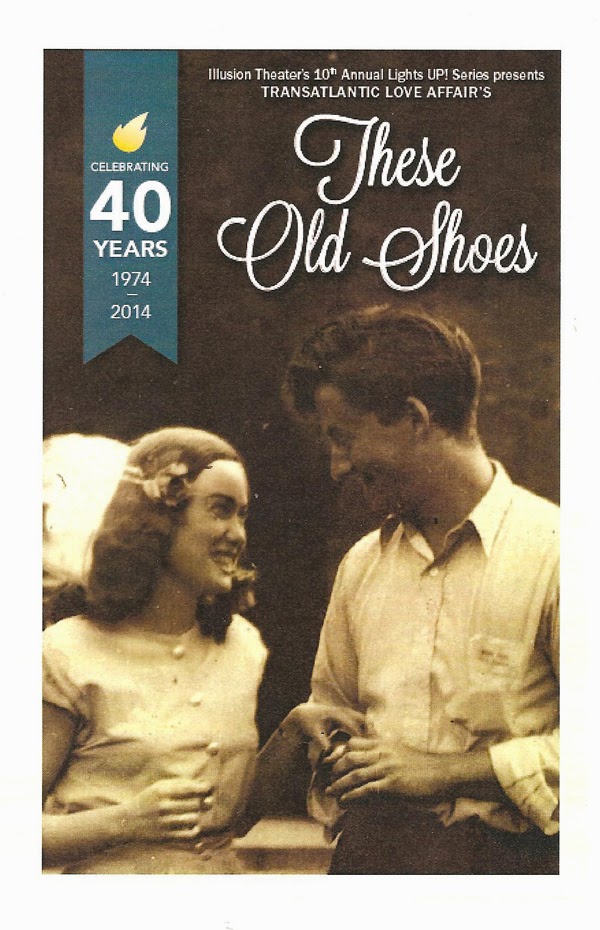 I'll never forget the first time I saw Transatlantic Love Affair. It was the "Audience Pick" show at the end of a long and exhausting 2012 Fringe Festival. I was tired and crabby and fringed out, but from the moment the lights went down on Ash Land, TLA transported me to another world, a world so specifically and beautifully created on a bare stage by a group of performers using nothing but their bodies, voices, and souls to communicate the story. I've seen them a number of times since then, both at the Fringe and as part of Illusion Theater's "Lights Up" series, and they continue to move me beyond what just "ordinary" theater is able to do. TLA returned to Illusion Theater last night with a remount of their 2013 Fringe hit These Old Shoes, a touching story of time, memory, regret, second chances, and long lost love rediscovered. In everything they do, TLA is nothing less than exquisite (not a word I use lightly, usually reserving it to describe the epitome of the art form that television can be, aka Mad Men). But disappointingly, the theater last night was not as full as it should have been. My goal in writing this piece is to get as many people as possible to go see These Old Shoes. You cannot call yourself a true Twin Cities theater fan if you've never seen Transatlantic Love Affair, and there's no better place to start than with this achingly lovely show.

In an original story conceived and directed by co-Artistic Director Diogo Lopes, These Old Shoes introduces us to a group of people living at a retirement community, and a man named Jim (Derek Lee Miller) who is reluctantly moving in. Jim's granddaughter Beatrice (Adelin Phelps) comes to town to help him pack up his house and move into the community. As Jim goes through his things, memories of days and people long past are stirred up. He remembers a young woman named Marjorie (Peyton McCandless) whom he once loved and planned to spend his life with, until his experience in the Korean War changed him and came between them. They both went on to live seemingly happy lives apart, but never forgot each other. I don't think it's a spoiler to say that Marjorie lives in the community that Jim is joining; the true beauty of the piece is watching the two stories unfold - past and present - and how they come together again.

In typical TLA style, there are no props or set pieces on stage. Barefoot actors in simple clothing create everything in this world - furniture, a grandfather clock, trees, doors, gravestones. They mime with invisible props. Sometimes you don't quite know what action they're miming or inanimate object they're embodying, but at other times, it's so clear you can almost see it. As we move from the past to the present, each of the ensemble members (also including Heather Bunch, Eric Nelson, co-Artistic Director Isabel Nelson, and Allison Witham) physically transforms from a young person to an old person, each in their own unique and specific way, whether it's the subtle droop of the shoulders and sinking inward, or a back that's fully bent over, or a slower less stable way of walking. Age affects people differently, and this cast allows you to see those differences. One addition to the piece since the Fringe version is that we get to see each of the members of the retirement community in their past, whether as an actor, or a secretary, or a doctor. This glimpse into the past helps to flesh out each of these characters and inform who they are in the present story.

Transatlantic Love Affair also knows how to harness the power of music to maximum emotional effect. Dustin Tessier provides the soundtrack to this story on electric guitar, alternately melancholy and hopeful as the story requires. The one theatrical "trick" that's employed is the lighting (by Michael Wangen), which along with the music helps to accentuate the mood created by the ensemble. All of these pieces combine to create a world that feels so real and specific, it's positively jarring to the soul to leave the theater and go back into the real world, a world that now feels too bright and garish, and somehow colorless at the same time, compared to that sparsely beautiful world experienced on stage.

It's not possible to adequately describe what it is that Transatlanctic Love Affair does. It's a style so unique and specific, you just have to see it for yourself. Let go of what you think is reality, let your imagination take over, and let them take you on this exquisitely lovely journey. These Old Shoes is playing now through February 14. Trust me when I tell you you need to see it, and be sure to take advantage of the discount tickets on Goldstar.com.