"The Misanthrope" at Bryant Lake Bowl 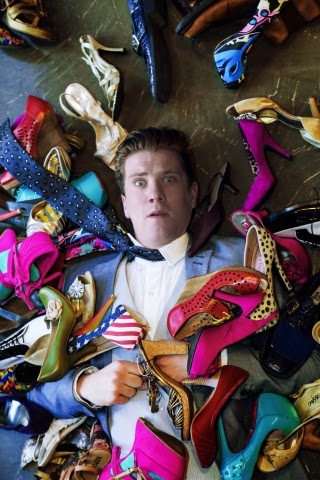 Such is the title character of 17th century French playwright Molière's most popular comedy The Misanthrope. In a new adaptation by the show's director Adrian Balbontin, based on the translation by Robert Cohen, this cantankerous character is re-imagined as a New York fashion designer. The play opens, at the informal setting of the Bryant Lake Bowl Theater, with a fashion show. Musicians accompany the fashion show and provide interludes between the five short acts of the play. All of this adds to Molière's biting social commentary, heard in delicious rhyme, to create a thoroughly entertaining evening and a great way to jump into the 2015 theater year!

Alceste is the titular misanthropic designer (Sam Pearson, appealing in a Benedict Cumberbatch sort of way) surrounded by a group of characters he barely tolerates, being too quick to point out the faults in everyone, including himself. He's an idealistic man who expects the best in people and society, and is constantly frustrated when they don't live up to his high standards. But despite himself and his ideals, he can't help but love Celimene (a charming Devon Cox), a flighty and flirtatious gossip with many suitors (of all genders and persuasions). Celimene assures Alceste that they mean nothing, and he's the one she truly loves. But he can't believe her, and when given proof of her dalliances, he's devastated, but then forgives her and begs her to leave this world and live with him away from distasteful society. When Celimene is unwilling to leave the life and society she loves, Alceste walks off into the sunset, alone.

This clever adaptation name-drops designer such as Louis Vuitton and Isaac Mizrahi, and feels subtly modern. The talented young cast handles the difficult rhyming dialogue with ease and makes it sound natural, with occasional winks at the audience when it stretches for the rhyme. It's all done in a mostly light-hearted manner, except for a few tense scenes when Alceste's anguish at his predicament is palpably felt.

I'm not sure what genre of music combines a ukulele and mandolin with a trumpet and bongo drums, but the result is quirky and whimsical and wistful, setting a perfect tone for the show. Joe Scheller (who introduces the show and occasionally interacts with the cast) and Maya Elena Baglien add their lovely vocals, and there's a fun interplay between cast and band, as Alceste (or one of the other characters) snaps his fingers to call the band to play when the conversation is over.

When you're setting a play in the fashion world, wardrobe is important, and costume designer Jenna Rose Graupman rises to the task. Each character has a specific style, from Alceste's neat suit to Philinte's hoody, from Eliante's mousy look to Celimene's series of pretty party dresses you might see on [insert name of current female pop star], creating an eclectic mix that's a feast for the eyes, as the music and dialogue is a feast for the ears.

This delightful Misanthrope continues to spew his discontent through January 17 at Bryant Lake Bowl, with 7 and 10 pm shows lasting a perfect 90 minutes, and full menu and bar service during the show (which personally I find a bit distracting, but does contribute to the fun and relaxed atmosphere).