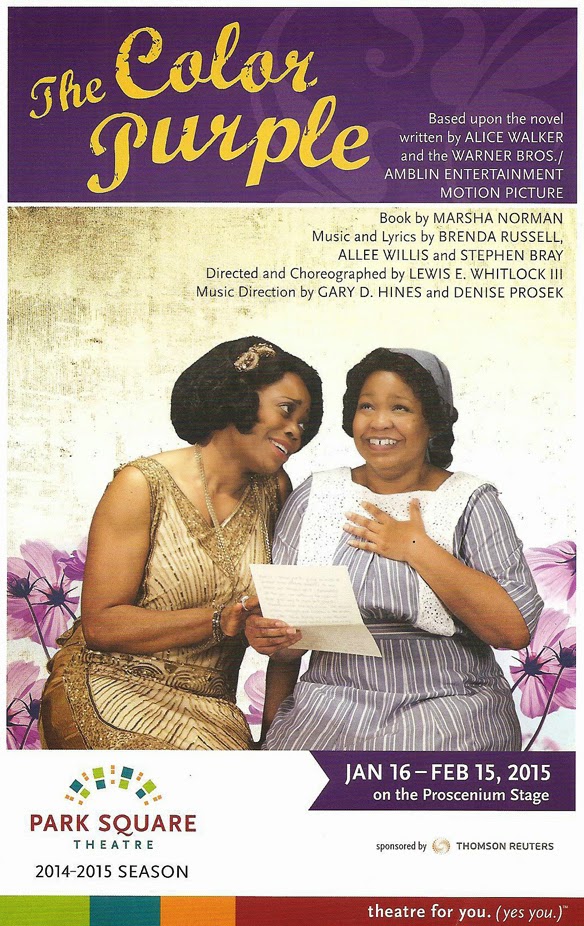 Alice Walker's 1982 novel The Color Purple is a story so beautiful, moving, inspirational, and epic that it needs to be seen and heard in as many formats as possible. If someone wants to turn it into a Saturday morning cartoon series I'm all for it, as long as it stays true to the spirit of the original. And the 2005 Broadway musical does that and more. I saw the Broadway tour in 2009 and wept like I never have at the theater, so overwhelming is the emotional impact of this story of a woman who is beaten down by life for so many years, yet somehow comes through it all and discovers her own strength, beauty, identity, and sense of self-worth, the emotional impact increased by the addition of music. Park Square Theatre is presenting the first local production of The Color Purple as part of an ambitious and exciting season that includes the addition of a second stage, partnership with theater companies and artists around town, and a greater commitment to diversity and the community. It's a wonderful statement, but more importantly, The Color Purple is a truly beautiful and moving production that brings to vivid life this epic and beloved American story.

The Color Purple is Celie's story, a young, poor, black woman living in rural Georgia in the early 20th century. At 14, she's had two babies by her father, who has "gotten rid of them" and then sells her to a widower who needs a wife to take care of his home and children. The only love Celie knows is that of her sister Nettie, from whom she is separated and not allowed contact. Celie is repeatedly told by everyone that she's ugly and worthless, so of course she believes it. But as the 40 year story plays out, she meets a few women who inspire her and teach her that life can be more than pain and drudgery. Celie's hard-working daughter-in-law Sofia is a strong woman who demands respect, the glamorous singer Shug Avery teaches Celie about love, and Nettie comes back into her life from far away. It's truly remarkable to watch this woman who has gone through so much choose to reclaim her life from those who have belittled and diminished her, and create a happy life with people and work that she loves, and a renewed faith in herself and the goodness of the world. In Celie's crowning moment, just after the woman she loves leaves her, she sings, "Most of all I'm thankful for loving who I really am. I'm beautiful. Yes, I'm beautiful, and I'm here!"

This brilliant cast of local talent is led by Aimee K. Bryant as Celie, who brings such humanity, vulnerability, and strength to the role. Jamaica Meyer is a newcomer to the Twin Cities theater scene, but she more than holds her own on this stage full of veterans. Her Nettie is ray of light and hope. T. Mychael Rambo is menacing as the cruel Mister, and his portrayal of Mister's breakdown and rebirth make me forgive him against my will. Thomasina Petrus is perfect for the role of Sofia, so strong and funny and just a delight to watch. Darius Dotch is her equal as Harpo, and the two portray perhaps the most loving and healthy relationship in the story. Their duet "Any Little Thing" is especially charming. Last but not least, Regina Marie Williams fully embodies the larger than life character Shug, and the Shug/Celie duet "What About Love?" is a highlight. The entire ensemble (which includes local favorites like powerhouse Jamecia Bennett and the super smooth Dennis Spears) is fantastic in multiple roles, but special mention must be made of the Greek chorus of gossipy church ladies - Ginger Commodore, Shirley Marie Graham, and Samia Butler - an absolute hoot as they patter in gorgeous and intricate harmonies.

The score is a mix of gospel, jazz, traditional African, uptempo playful numbers, and moving ballads, and sounds beautiful under the musical direction of Gary D. Hines (with new orchestrations by Denise Prosek to fit the score to a smaller six-piece orchestra). The sparse stage allows room for the story and characters, with just a few simple set pieces moved on and off the stage to hint at the location. There's also plenty of space for director/choreographer Lewis E. Whitlock III's creative and diverse dance numbers, including a working man's dance dance, lively church dances, and lovely African movement.

The Color Purple is a big Broadway style musical in a more intimate setting with a fantastic local cast. This is such a story of hope, resilience, faith (not in an overly churchy way - this is Alice Walker, a self-described "born again pagan"), community, and love. It's a truly moving and emotional experience to go on Celie's journey of self-discovery with her, led by this awesome cast and creative team. Head to downtown St. Paul between now and February 15 to be inspired, moved, and uplifted by Celie and friends.