"Fun Home" at Circle in the Square on Broadway 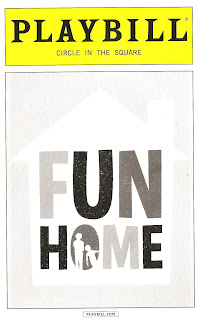 The new original musical Fun Home made history this year as the first musical created by a team of women (music by Jeanine Tesori, book and lyrics by Lisa Kron) to win the Tony. It's about time, right? But that's not a reason to go see it. Well, it's not the only reason. The reason to see Fun Home is that it's a tragic and funny true story beautifully told through music and cleverly constructed as a memory play, with multiple timepoints intermingling to create a whole and complete picture of a life. That life is Alison Bechdel, cartoonist and author, upon whose autobiographical graphic novel the musical is based. This story that is part coming of age, part family drama, part self-discovery, part coming to terms with the past, feels so real, raw, and intimate. The day after seeing Hamilton and thinking "look what we can do" at the grand scale of it all, Fun Home made me think "look what we can do" on the other end of the spectrum. That is, tell a small, intimate, specific yet universal story through music and theater.

As the story unfolds, we watch a present-day Alison writing her novel, a memoir of her life. Her memories come alive in front of her as she observes, comments, and sometimes interacts with them. She sees her child self, growing up in a seemingly happy family in the '70s with an actress mother and a teacher/funeral home director father. But something is off that young Alison can't quite grasp, and current Alison struggles to understand as she writes her book. Alison also sees her college age self realizing she's gay and coming out to her parents, only to find out that her father, too, is gay, living in the closet and causing complications and heartaches for his family (and himself) through all of the secrets and lies. This is not a happy-go-lucky kind of musical, but one that has moments of humor and moments of grief, sometimes inseparable, like life.

Watching this musical is almost like reading the graphic novel upon which it is based (which I just ordered), as present-day Alison paints a picture of her life for the audience - all the good, bad, and ugly of growing up in a loving yet complicated family. As they say, the more specific something is, the more universal it is. And this story, which is specifically Alison's, is universal in its themes of belonging, growing up, trying to figure out who you are, changing relationships with parents, and remembering the past and accepting it while not letting it define you. In the latter point Fun Home reminds me one of Jeanine Tesori's other musicals, Violet (one of my favorites) - an intimate and personal story of a woman coming to terms with her past and her complicated relationship with her father, told beautifully and poignantly with a small cast and orchestra.


Six or so months after opening, the original cast is mostly intact, except that the child understudy Gabriella Pizzolo (one of those kids that was born for the stage) has taken over as young Alison. She fits right in with this wonderfully cohesive cast that brings this story to life in such a very real way, especially the three actors playing Alison at various ages - Beth Malone, Emily Skeggs, and Gabriella, like three phases of a single life experience. Playing Alison's father earned Michael Cerveris won a Tony Award, and it's obvious why he won for his performance of this complicated and conflicted man as he alternately infuriates and engenders empathy. The rest of the nine-person cast are all wonderful in their roles, adult and child alike.

The in-the-round staging of Circle in the Square is perfect for this show as the scenes transition quickly and seamlessly across distance and decades, set pieces gracefully sliding on and off stage or disappearing into the floor. Director Sam Gold utilizes the space well. The one-level arena-like seating means that even if you're sitting in the back row, as I was, you feel like you're watching this story from within. As a band geek, I enjoyed watching the wonderful six-person on-stage band (with the percussionist seemingly backstage somewhere), under the direction of Chris Fenwick. And any child of the '70s will recognize and love/hate the bellbottoms and turtleneck sweaters (scenic and costume design by David Zinn).

The best theater is that which comes from a place of truth, and this story is painfully, beautifully true. Thank you Alison for sharing your story with us, and Jeanine and Lisa for bringing it to life in the way that speaks most clearly to me - musical theater. (Order tickets here, or get them at the TKTS booth like I did.)