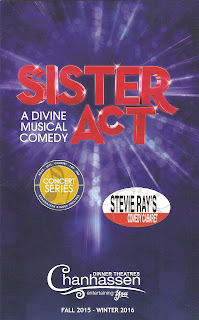 While I was off in NYC seeing a bunch of Broadway musicals last week, Chanhassen Dinner Theatres opened a new show. I missed the Sister Act press night (the best press night in town), but they kindly let me attend last night - on my birthday! (I can now cross the Chan emcee wishing me a happy birthday off my bucket list.) Director Michael Brindisi has once again brought us a polished production, and one that's a lot of fun and also has a beautiful heart, I enjoyed it as much as anything I saw on Broadway last week. This is a relatively short run for the Chan (just four months), so make your plans now so you don't miss this wonderful and heart-warming musical. If you need more reasons to see it, I've got ten - read on.