"The Wizard of Oz" at Children's Theatre Company 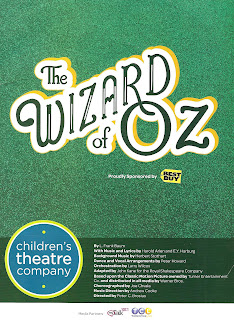 Children's Theatre Company proves again and again that you don't need to be a child to enjoy a "children's show." Maybe it's because children are people just like grown-ups, and CTC treats them that way. Or maybe it's because we were all once children too. With their latest production of The Wizard of Oz, CTC reminds weary grown-ups what it is to experience the wonder and magic of childhood. They have brought one of the most iconic movies of all time to vivid life on stage. It's understandable why this show has a permanent place in their rotation - it's full of heart, color, wonderful music, and a beautiful message of home, family, self-discovery, and friendship. It's enough to restore your faith in humanity, at least for a moment. This so-called children's story is peppered with wisdom such as "It's always best to start at the beginning," "Some people without brains do an awful lot of talking," and "If I ever go looking for my heart's desire again, I won't look any further than my own backyard. Because if it isn't there, then I never really lost it to begin with." And if you don't tear up when Dorothy says her good-bye to her new friends in Oz, you might not have a soul.

This adaptation (by John Kane) hews very close to the movie - with something as beloved as The Wizard of Oz, you probably don't want to mess with it too much. The look of the show captures the iconic look of the movie, from the muted colors of the farm to the technicolor dream of Oz, which spills over and makes Kansas a bit more colorful upon Dorothy's return. The tornado and flying effects are nicely achieved by a combination of objects moving and flying above the stage on strings (or by magic?) and video effects depicting the dizzying eye of the tornado (scenic design by Scott Bradley, costume design by Helen Q. Huang, and flying effects by ZFX). One improvement from the movie is that these familiar and beloved songs sound even better when played live by the gorgeous eight-piece pit orchestra directed by Andrew Cooke.


The cast includes faces familiar and new. Traci Allen Shannon (CTC's newest company member) shines in the role of Dorothy, with spirit, emotion, and a beautiful voice, especially on that most famous song "Over the Rainbow" (including the lovely and not often heard intro). It should not be noteworthy that an African-American actress is playing Dorothy, but somehow it is. I grew up a white girl in suburban Minnesota; I cannot imagine what it means to countless little girls (and boys) of color to see themselves represented onstage as America's beloved Dorothy, a Dorothy that truly does represent all of us.

Dorothy couldn't ask for better friends than these three: Dean Holt's limber-limbed Scarecrow, Bradley Greenwald's sweet Tin Man, and Reed Sigmund's blustering Cowardly Lion. All three have played these roles before, and they are each perfectly cast and have perfected performances that are familiar from the film, yet with their unique individual spin. They are a brilliant comedy and music trio, both on the farm and in Oz. It's worth the price of admission just to watch these three do their thing.

As the Wicked Witch, Mary Fox has transformed her usually sweet and sunny disposition into something deliciously dark and evil, gleefully delighting in the chase and capture of Dorothy. Her death scene (which includes my favorite line, "what a world?!") is pretty fantastic, although I can't help but wish we could figure out a way to dispatch the enemy without killing her. I'd love to see the witch humanized a bit and brought to justice without violence, but I guess that's what Wicked is for.

The wonderful ensemble, most of whom pull double or triple duty, includes Janet Hanson as the weary Auntie Em and the benevolent and sweet-singing Glinda; Gerald Drake as the kindly con man in both realms; lots of young'uns and adults alike that are a joy to watch as munchkins, citizens of Oz, and flying monkeys or befurred guards; and last but not least, the most patient and compliant dog as the ever-present Toto (a role shared by two dogs Dusty and Nessa).

I almost wasn't going to see CTC's The Wizard of Oz again because I saw it just four years ago, and this is virtually the same production with a few cast changes. But like the movie, it's a show you can see over and over again because of the entertainment value, the comfort of the familiar story, and the warm heart at its center. If you feel the same, head to CTC between now and January 10, by yourself or with your friends, children, or grandparents.