"Allegiance" at Longacre Theatre on Broadway 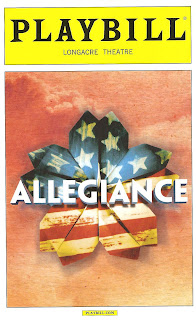 Last night marked the opening of Allegiance, the new Broadway musical about Japanese internment camps in WWII era America. Book writers Marc Acito, Jay Kuo (who also wrote the music and lyrics), and Lorenzo Thione were inspired by the childhood experience of actor and Star Trek legend George Tekei, but created a new story and characters within the context of this unjust and often overlooked part of American history. I was fortunate enough to see a preview last week, when my friend snagged what were probably the last two tickets on the sold out opening weekend. Although as a musical there are some weak spots (I have to agree with the reviews that came out this morning, that use words like generic, heavy-handed, and cliche), the huge cast consisting mostly of Asian-American actors is wonderful and it's such an important story to tell. And as the smash-hit musical Hamilton proves, what better way to tell a story about American history than through the quintessentially American art form that is musical theater?

George Tekei was five years old when his family was forced to live in an internment camp for almost four years (watch a PBS interview with George here). But the fictional family of Allegiance consists of a brother and sister in their 20s, with their widowed father and grandfather. They try to make a life for themselves under less than ideal circumstances, banding together with other camp residents to demand improvements ranging from medication to a community dance. Sammy decides to join the Army as soon as he's allowed, proving himself a loyal American, while his sister Kei works for justice from within camp. She falls in love with Frankie, who takes an opposing stance to Sammy, refusing to fight for a country that has imprisoned him and his people. Similarly, Kei and Sammy's father is moved to a harsher prison because he will not swear allegiance to a country that treats him so unjustly, while their grandfather plants a garden to improve life in the camp. Each character tries to make life better and fight for justice in their own way, big or small. When Sammy returns from war, he is upset with the choices his family made, resulting in a decades long estrangement that is eventually healed - but at what cost?

Despite the fact that an internment camp is a new setting for a musical, the plotlines and characters within the larger context are fairly traditional and a bit predictable and formulaic. But there are some lovely moments and wonderful performances. George Tekei is a delight and has the audience in the palm of his hand, pulling double duty as the elderly Sammy and the revered grandfather, a twinkle in his eye that can be seen clear up to the mezzanine. Lea Salonga is a gift to Broadway and it was a pleasure to finally see her live onstage (not counting the time she brought me to tears singing "On My Own" at a soap opera fan event). Her strong performance as Kei brings out every emotion in the character. Telly Leung is excellent as young Sammy, as is Katie Rose Clarke as his love interest. The two share a sweet love story and sound gorgeous singing together (even if the interracial relationship is never really explored). The entire cast is fantastic and one of the best things about this show is that it's giving opportunities to so many talented Asian-American triple threats to be seen on the Broadway stage.

The mostly traditional musical theater score is pleasant enough, peppered with some Japanese elements, and the creators take advantage of the '40s time period for some fun "Boogie Woogie Bugle Boy" type music and dance numbers (the only good part of WWII was the music). The dance scene is particularly fun, as is the baseball scene, in contrast to the war scenes which are jarringly disturbing.

I found myself wishing that the creators had told George Tekei's story, rather than trying to cram in so many elements of history that it ends up being a watered down generic story (Fun Home is a great example of the idea that the more specific a story is, the more universal it is). But despite its shortcomings, Allegiance is well worth seeing for the wonderful performances, excellent Asian-American cast, and the telling of an important story in American history.