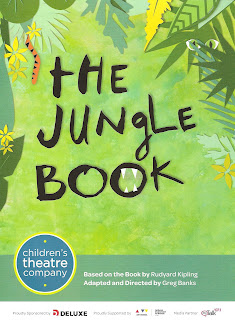 Confession: I've never read The Jungle Book (the collection of stories written by Rudyard Kipling in 1894) or seen the 1967 Disney movie (that I can remember). So I was on the fence about seeing Children's Theatre Company's new adaptation, until I saw the cast list (more on them later). They're about a month into their two and a half month run, and I'm so glad I decided to see the show. This coming of age story that just happens to take place in a jungle is a wonderful tale of friendship, family, community, interdependence with nature, and finally having the courage to strike out on your own. With a sparse adaptation featuring just five actors playing all of the characters (most of them animals), whimsical musical accompaniment and sound effects, and a set that's like the best playground imaginable, The Jungle Book is sheer delight from start to finish.

Even if you, like me, have never read the book or seen the movie, you probably know the story. A young human child is raised by wolves in the jungle, who call him Mowgli. As he gets older, the bear Baloo and the panther Bagheera take him under their wings, er... paws. Mowgli learns to commune with the animals of the jungle, but soon finds out that not all of them are his friends. He has the usual growing pains of any human child, but eventually comes to appreciate his animal family and all they've done for him (there's hope, parents!). Because of their love and guidance, he's able to go off on his own into the human world and find his place in the world.

The delights of this adaptation by Greg Banks, who also directs are many, and include:

This Jungle Book is so fun and playful, with a beautiful message about a family that's not related by blood (or even of the same species) and a connection with nature. Whether you're a child or an adult, a fan of the story or unfamiliar with it, it's impossible not to love it. (Continuing through December 20 in CTC's ground level Cargill Stage).