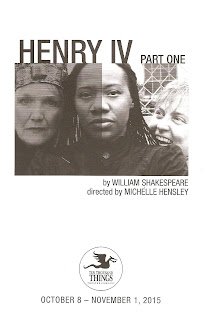 Typically, if I heard "Shakespeare's Henry IV Part I," my immediate reaction would be - ugh. Sounds heavy and difficult and confusing and exhausting. But given the Ten Thousand Things treatment, with Michelle Hensley at the helm and an incredibly brilliant cast of eight women, it's anything but. Sure there are still a heck of a lot of characters with weird names, and alliances more difficult to keep straight than the latest season of Survivor, but TTT always breaks things down to get to the truth of the story, characters, and emotions at play. So while maybe I wasn't always clear on who was warring with whom, I was still caught up in the power of the story. And with a cliffhanger ending suitable for any movie franchise, I found myself wondering, when's Part II?

As assistant director Per Janson told us in the traditional pre-show spiel (filling in for Michelle Hensley, who is in San Francisco being named to the YBCA 100, because she's awesome), Henry IV Part I is about King Henry IV of England, who recently took the crown from Richard II. But it's really the story of his son, Prince Hal, and whether he will decide to back his father or join with the rebels who are springing up all over England to remove him from the throne. Michelle notes in the playbill:


The stark choice faced by Prince Hal in this 400-year-old play is actually one still facing many young men today: to become a leader in an often ruthless world of competition, dominance, and conquest - whether in business, politics, sports, or war - or to rebel against it all through a life of thievery, drunkenness, and debauchery. We decided it would be interesting to look at this story through the lens of an all-female cast.

Interesting, indeed. Eight women (some of the Twin Cities' finest actors) play over 20 characters and tell this layered story of conquest, loyalty, rebellion, and the complicated politics of 15th century England. The aforementioned "Ten Thousand Things treatment" means that we watch the play in a small, fully lit room, with minimal sets and costumes, Peter Vitale's evocative and eclectic soundtrack, and none of the usual tricks of the theater to come between cast and audience. We are all a part of this experience, which somehow feels more real and immediate.

I'm not going to bore you with a complicated plot summary, Wikipedia can tell you that. Instead I'll tell you that Michelle Barber reigns over the proceedings as a fierce and indomitable King Henry; recent Ivey-winner Shá Cage is empathetic as the conflicted Prince Hal; Thomasina Petrus is the King's loyal comrade; Anna Sundberg and Austene Van are strong as rebel leaders; Meghan Kreidler, making her TTT debut, plays a number of roles and fits right in with her expressive spirit; George Keller is a very entertaining drunk, among other characters; and Karen Wiese-Thompson is, as always, a comic delight, here as the foolish knight Falstaff, spot-on hilarious in every choice she makes. And may I say, it's such a treat to see these amazingly talented women, without the glamorous make-up, hair, and wardrobe usually associated with the theater, and looking all the more beautiful and strong because of it.

One more thing I need to tell you - there are some really brutal and real-looking fight scenes, sometimes several fights happening at once. It's so real and close that at times I almost feared for the actors' and the audience's safety, except that I know these people are pros. Kudos to fight coach Annie Enneking for her intricate choreography and to the cast for pulling it off.

Go to the Ten Thousand Things website to see a fun and cool trailer for the show and to purchase your tickets. Seating at Open Book is limited so make plans soon!