"An Octoroon" at Mixed Blood Theatre 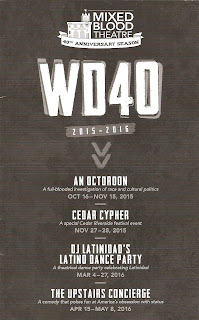 The word octoroon is defined as "a person of one-eight black ancestry." The Octoroon is a 19th Century play by Irish playwright Dion Boucicault about which Wikipedia says, "among antebellum melodramas, it was considered second only in popularity to Uncle Tom's Cabin." An Octoroon is a new play by playwright Branden Jacobs-Jenkins, who adapted the play and added himself as a character, writing the play and playing all the white male parts in white face, with the original playwright and his assistant playing roles in redface and blackface, while a rabbit seems to pull the strings behind the scenes. Got all that? Believe me, it's a lot to take in, and the play says some pretty profound things about race and racism in the past and present. But despite being a little perplexing and intentionally offensive (in a way that's not really offensive because it's satire), the whole thing is kinda brilliant in a crazy sort of way.

I'm not going to describe the plot of the play to you; it's one of those things you just have to see for yourself (and you should). Suffice it to say, this adaptation actually hews quite close to the original in the middle play-within-a-play bit, in which a kindly slave owner dies and leaves his kindly wife and heir with no money to save the plantation or its slaves, including the kindly dead slave owner's octoroon daughter whom his wife loves and they both treat like a daughter (because that happened). But before we get to all of that, the "black playwright" sets the scene by telling us the origins of this play, and why he was forced to play all the white male parts himself. Then the play begins, done in an exaggerated melodramatic style that points out the silliness of this depiction of the Old South, complete with piano accompaniment to heighten the mood (beautifully and cleverly composed and performed by Eric Mayson). In the fourth act of the play-with-a-play, the playwright and some of the other actors break out of character to describe the scene that's too difficult to stage, and to offer commentary on it. It's all very meta, and also offers some comments on theater itself (as well as some nifty pyrotechnics).

Director Nataki Garrett somehow keeps all of these timelines and realities moving together smoothly and making sense, and the cast fully commits to the melodrama of the piece. William Hodgson gives several excellent performances - as the playwright and both the kindly slaveowner's heir and the evil slaveowner, sometimes playing multiple characters in one scene, and even having a fight with himself (kudos again to Annie Enneking for her fight choreography). Jon Andrew Hegge is ridiculous (in the best way) as the Irish playwright in redface; Ricardo Vázquez portrays every stereotype of blackface; Jamila Anderson, Chaz Hodges, and Jasmine Hughes are amusing as the modern-talking slave women; and Jane Froiland is an absolute hoot as the stereotypical and overly dramatic Southern Belle. Megan Burns as the titular octoroon Zoe is the straight woman in this crazy scene, bringing dignity and humanity to her character. Last but not least, I'm not sure what Br'er Rabbit has to do with any of this, but Gregory Parks is nimble and slightly creepy in that oversized rabbit head (with movements delightfully punctuated by the aforementioned Eric Mayson's music).

At one point the playwright character complains that there's no novelty in the theater anymore. Which any theater-goer in this town knows is not true, and this play is Exhibit A. At the end of the play another character says, "we were just trying to make you feel something." An Octoroon will most definitely make you feel something, it will likely make you feel many things, some of them uncomfortable or even unpleasant. But that's not a bad thing in theater, in fact sometimes it's necessary. An Octoroon continues at Mixed Blood Theatre through November 15. Tickets are free through their Radical Hospitality program, or you can reserve tickets in advance for $20.