"Broadway Songbook: The '70s Songbook" at the Ordway Center 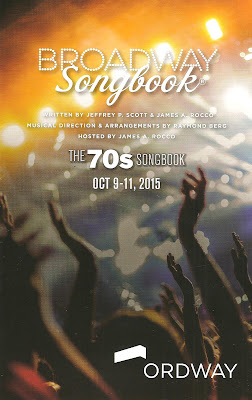 In the 12th installment of the Ordway's fun and educational "Broadway Songbook" series (and the 11th I've seen), host and co-writer (along with Jeffrey P. Scott) James Rocco and Music Director Raymond Berg present the songbook of the '70s. Unlike other shows in the series, the songs in this show don't all come from musicals. Rather, the theme is singer/songwriters of the '70s that had an effect on Broadway. Or something like that. The rules for inclusion seem a little loosey goosey - no Xanadu because the movie on which it was based came out in 1980 (despite the fact that two of the stars of the Chanhassen's 2012 production are in the cast), yet "Can You Feel the Love Tonight" from the 1994 movie The Lion King, brilliantly adapted for the stage in 1997,* is fair game because Elton John was a songwriter in the '70s? And no mention of one of the most popular and long-lasting musicals that came out of the '70s - Chicago, or songs from Mamma Mia, another popular jukebox musical based on Abba songs from the '70s. And if we're just singing great songs from the '70s, where's John Denver and The Carpenters (my favorite '70s musicians)? As a musical theater nerd, I would prefer more musical theater songs and fewer pop songs. But that being said, Broadway Songbook: The '70s Songbook is still a fabulously performed, fun, entertaining, and educational evening of music.

I count every one of the five members of this super talented cast (Dieter Bierbrauer, Caroline Innerbichler, Kersten Rodau, Randy Schmeling, and Erin Schwab) among my favorite music-theater performers in the Twin Cities, so it's a treat to hear them sing any song, no matter where it comes from or when it was written. They each get their moment in the spotlight, and back each other up for those dreamy '70s harmonies. Accompanied by an awesome four-piece band led by Raymond Berg on piano, there's no doubt that this show contains many amazing musical moments. Here are a few of my favorites:

Despite being a little light on the Broadway, I really enjoyed this show, as I do all "Broadway Songbook" shows. It features some really incredible performances of those great '70s songs, and it did teach me something new about Broadway musicals. Rest assured that the next "Broadway Songbook" will return to its roots, featuring the music of Kander and Ebb next summer.


*The Lion King returns to Minneapolis, where it made its pre-Broadway debut, next summer.
**The Ordway is producing A Chorus Line next February, with a (hopefully) mostly local cast.
***The national tour of the Carole King musical Beautiful stops at the Orpheum in November.