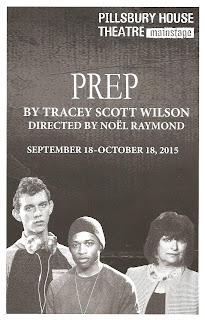 It's been quite a week. Both in the real world, with yet another tragic mass shooting at a school, and in my theater world (which sometimes feels more real to me than the real world does). I started my week in theater with the Guthrie's beautiful production of the American classic To Kill A Mockingbird, about the wrongful conviction of a black man in 1930s Alabama. I followed that up with Roger Guenveur Smith's virtuoso performance in the one-man-show he created about Rodney King, whose brutal beating by LAPD officers in the early '90s led to one of the most deadly riots in our nation's history. While both of these events take place in the past, and one is fictional, there are striking parallels to the events of today that led to the Black Lives Matter movement. So it was with a heavy heart at the state of the world that I showed up at Pillsbury House Theatre last night. Having seen Tracey Scott Wilson's Buzzer twice, I knew that her new play Prep, commissioned by Pillsbury House and written after "extensive interviews with students, parents, and residents regarding racial tension in Minneapolis," would not be easy. But I was pleased that after this week of violence and injustice in the real and theater world, this one left me with a bit of hope. Yes there's plenty of work to do, but maybe, through the kindness and attention of individual to individual, we can all get along.

Prep actually reminds me more of The Gospel of Lovingkindness, seen at Pillsbury House earlier this year, than Buzzer, in that the three characters mostly speak to the audience in monologues (often responding to recorded voices), rather than speak to each other. Even when two of them are in a scene together, they often speak to the audience about each other. This device really lets us get inside each character's head to know what they're thinking and feeling. The first character we meet is "Miss" (Jodi Kellogg), the principal of an underprivileged school in an unnamed city, who sends her children to Ivy-league-like school a few miles away. But she genuinely cares for her students and wants them to succeed. She's taken a special interest in Chris (Kory LaQuess Pullam), a good student who is struggling after the recent death of his friend in a drive-by shooting. He has some disturbing ideas about how to make a statement and spur change in the community. He tells his friend Oliver (Ryan Colbert) about it, which angers him and causes a fight, leading to events that change the three and the school for good. But not in the way that you think.

Tracey Scott Wilson has written the play with a rhythm and rhyming scheme that makes one think of Shakespeare. These three actors are all wonderful at speaking her words lyrically, yet still making them sound like natural speech. Joseph Stanley's sparse set with chain-link fence on the back wall and two raised platforms creates a simple and colorless backdrop for the story. Director Noël Raymond guides her actors well through the rhythm of the words and the story, and lets each establish their character in their own space on the stage, until they start intermingling in space as their storylines connect.

In just over an hour, Pillsbury House Theatre's Prep tackles some heavy themes of racism and violence in a realistic yet poetic way. It doesn't offer solutions so much as a ray of hope and a way to think and talk about the issues. Playing now through October 18.