"The Events" by Actors Touring Company at the Guthrie Theater 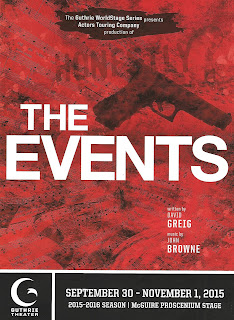 Playwright David Greig and director Ramin Gray of Actors Touring Company (an internationally touring theater company based in London) created The Events in response to the 2011 bombing in Oslo, Norway and the horrific mass shooting at a children's camp on an island a few hours away. The play, which stops at the Guthrie Theater this month on its world tour, isn't directly about that incident, but rather the terrifyingly frequent occurrence of mass shooting events. It's sobering and thought-provoking and disturbing. It doesn't offer any answers to this recurring crisis, rather it seems like one person's (or a group of people's) attempt to process "the events." This story of one woman dealing with a mass shooting event she witnessed is told in an innovative non-linear way, with the two-person cast interacting with a different community choir every night. It plays through this weekend only but there's still time to catch one of the remaining performances.

Claire (Lesley Hart) is a priest and director of a community choir that offers a home and a community for people who are searching for a place to feel welcome. Through a series of scenes, we learn that this "multiculturalism" became a target for a violent, revolutionary madman who sees this diversity as a threat to his country and way of life. Clifford Samuel plays "the boy," as well as every other character that Claire interacts with on her quest to understand the event - her partner Katrina, her therapist, the boy's friend and father, an author, a politician, and a shaman. He smoothly and seamlessly transforms from one character to another as he helps to tell what really is Claire's story, her story of trying to get her life back after this horrible incident. Will she be able to forgive and let go, or will she find a way to exact the revenge she dreams of?

The scenes of Claire talking to someone about the shooting are interspersed with choir rehearsals, a new choir that Claire also uses to process "the events." The play jumps around a lot in an episodic, stream of consciousness sort of way that keeps the audience on its toes. In fact the audience seems an integral part of this piece, even more so than theater usually requires. The choir is played by a different local community choir every night, and in a way they play the part of the audience too, spending much of their time on stage watching the play. But they're also asked to sing and do some pretty crazy things, and even read some lines. Both of the actors are so natural and passionate and committed, and playful with the choir. It's interesting to watch the interaction between the cast and the choir, and the fact that the choir is not made up of actors, but just regular people, somehow makes their interactions seem more authentic.

Since one of the characters in this piece is the choir, of course there is music. Kudos to musical director Joe Bunker for working with a new choir every night and confidently leading them through not just the music, but also subtly directing them when to stand or move around the stage or speak. The night I attended, the choir was the Mindekirken choir, and they sounded just lovely singing traditional hymns and original songs (by John Browne). The closing song is particularly moving, the lyrics "and we're all here... we're all in here" sounding like a balm to the soul of the survivors.

These mass shooting events occur so frequently around the world, and especially in this country, that we almost become numb to them. The Events is one attempt to really examine and process a fictional event that feels all too real. (Four performances remaining on the Guthrie's Proscenium Stage.)