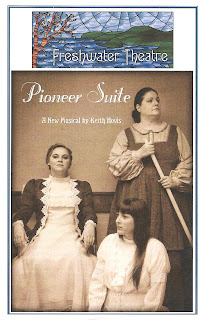 A new original musical, Minnesota history, a gorgeous score written in an early Americana style, a wonderful cast, beautifully rustic period costumes and set, and the real stories of three women who are given a voice. What's not to love about Freshwater Theatre's aptly titled Pioneer Suite? This piece, that is in effect three one-act musicals woven together with a similar theme, time period, and musical style, was written by Keith Hovis, who also music directs and plays keyboard in the three-piece band. I loved Keith's Minnesota Fringe musicals Teenage Misery and Shakespeare Apocalypse, which were both fringey delights, but Pioneer Suite is on a whole different level and proves that he can do more than write catchy songs and a silly and entertaining story. Pioneer Suite is a beautiful and fully formed musical, with moments of humor, darkness, depth, desperation, and heart.

The first act, or movement, is about "Mrs. Housel* of Suicidal Fame," and was presented as part of Freshwater's Archival Revival. Kelly Matthews performed this song at the Ivey's last year, and I'm so glad those of us who missed the original production have a chance to see it again, and more! Based on a newspaper clipping about a woman who attempted suicide nine times, Mrs. Housel is finally able to tell her own story, in her own words. It's obvious that Kelly has spent time with this character, as she makes the audience feel every note and emotion in Mrs. Housel's tragic story.

In the second act we meet Martha Angle Dorsett, the first woman lawyer in Minnesota. Actually we meet two Marthas, one at the ripe old age of 36 (Kendall Anne Thompson), and one a youthful 26 (Gracie Anderson). The younger Martha is facing a decision by the judge whether or not to admit her to the bar, which seems like the most important thing in life. The older Martha has decided to quite practicing law, and tries to convince her younger self that there's more to life than "success." They have some interesting song-conversations, and combining the powerhouse voices of Kendall and Gracie leads to some gorgeous sound. Philip Matthews as her husband Charlie completes the charming trio.

The final act is about Mary (Gail Ottmar), a farmer's wife, who has suffered great loss in her life and would most likely be diagnosed with clinical depression today. But in the late 19th century, all her husband (Jim Ahrens) and son (Zach Garcia) know is that mother spends a lot of time in bed. The visit of a beloved daughter (Libby Anderson) and her fiance (Lars Lee) serves to cheer her up for a time, until she learns that they're leaving the city to start their own farm, the same difficult life that has nearly destroyed Mary. This family drama provides some nice moments for everyone in the cast, from the sweet young couple in love, to the family eagerly preparing for the visit, to Mary singing about her "Melancholia."

Each one of these three mini-musicals could stand on its own (and I'd have a hard time picking a favorite), but putting them together creates an even more powerful and fulfilling experience. The music really evokes that pioneer feeling of the late 19th Century Midwestern frontier, and it's a beautiful thing to hear the stories of three everyday women, who didn't necessary do anything newsworthy in their lives, except that they lived. The closing song allows Mrs. Housel, the Marthas, and Mary to sing together about the power of telling one's story and being heard. I definitely won't forget these three remarkable women soon. Head to nimbus between now and October 18, and you won't either.


*Listen to Keith Hovis talk about the process of writing Mrs. Housel on the Twin Cities Song Story podcast, hosted by Mark Sweeney.