"The Spitfire Grill" at Lyric Arts 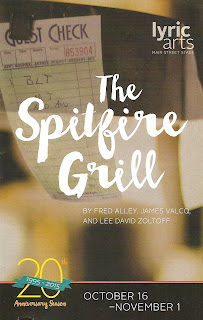 "There is a balm in Gilead, to make the wounded whole." So says the old spiritual, and so too is there a balm in the fictional town of Gilead, Wisconsin, the setting for the 2001 Off-Broadway musical The Spitfire Grill, based on the 1996 movie of the same name. Yes, this story of an ex-con finding redemption in a small town feels a little like a Hallmark movie, with an unrealistically idealistic portrayal of small-town life, but it's also poignant and touching and filled with stirring and moving music. In the new production by Anoka's Lyric Arts, the story is beautifully brought to life by a winning cast, and is a decidedly warm-hearted, feel-good musical that will leave you humming the tunes as you wipe away tears.

Upon being released from prison for a crime that is later revealed, Percy (short for Perchance) decides to move to the small town of Gilead based solely on the photo of the fall colors along the creek she finds in a newspaper, and the desire to make a fresh start somewhere new. Local Sheriff Joe acts as her parole officer and sets her up with a room and a job at the Spitfire Grill, run by Hannah, who begrudgingly agrees. Percy also meets Hannah's nephew Caleb and his wife Shelby, and mail carrier/town busybody Effy. She soon learns that small-town life is not as idyllic as that newspaper photo makes it out to be, with residents suffering from grief, abuse, and the longing to get out. But Percy also learns, perhaps for the first time in her life, what it is to be part of a community, to be needed, to experience trust and friendship. As is often the case in these fish-out-of-water stories, Percy is the catalyst for change in this community that has been stuck in a rut for too long.

The story and character development are told largely through music. And my favorite kind of music at that - a sort of folky/Americana, mixed with some Broadway sound. The off-stage five-piece orchestra led by Music Director Mary Cay Stone includes mandolin and fiddle, as any good folky band should. I really enjoyed the score (by James Valcq and Fred Alley) which evokes a definite sense of place - small-town America - and includes some lovely and interesting melodies that are designed to pull at the heartstrings. And everyone in this seven-person cast sounds fantastic and imbues the music with much emotion.

Katharine Strom has impressed in a few over-the-top comedic roles both musical and non-musical, but this is a star turn for her. She brings such depth, toughness, and raw heart to her earthy and earnest portrayal of Percy. Her voice is crystal clear and lovely, and brimming with emotion. Christy Jones also sounds lovely as Shelby, and the two portray a believable friendship. Martha Wigmore is tough and tender as the Grill's owner with a secret of her own, James Ehlenz is charming as Sheriff Joe who takes a shine to Percy, Patrick Jones is appropriately unlikable as the controlling husband Caleb, Shana Eisenberg provides comic relief as the busybody Effy, and Brad Bone brings humanity and pathos to the role of the mysterious visitor.

Gabriel Gomez's scenic design brings the beautiful Midwest fall outdoors inside the theater. The only indoor set is, appropriately, the charming and rustic Grill, with about half the stage filled with trees and leaves and representations of nature, an important character in the play. Adam Raine's lighting design casts a warm glow on the cast and the town of Gilead, making it a place you'll wish you could visit.

The Spitfire Grill reminds me a little of the musical Violet, and that's a very good thing. Both feature Americana music and a small cast and band, and tell the story of a young woman on a quest to heal her past and make a new start for a better future, positively affecting those she meets along the way. This is a story of friendship, of healing, of second chances, of community, of forgiveness. In this cynical time, it is indeed a balm to escape for a few hours into the simpler world of Gilead, where there are troubles aplenty, but where hard work, friendship, and community offer a chance for hope and healing. (Playing now through November 1.)