"The Cubicle" by Bucket Brigade at Art House North 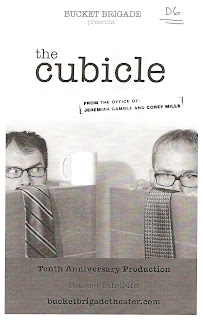 I've spent the better part of the last 16 years working in a cubicle, until I lucked into a job that allows me to work from home most of the time. I don't miss the daily grind of fighting traffic, making small talk with coworkers, and worst of all - spending the majority of your waking hours sitting in a small sterile box. The new-ish theater company Bucket Brigade is reprising their 2005 Fringe show The Cubicle (the company may be new to the scene but the players are not) at their new home Art House North - an old church in St. Paul's West End neighborhood that has been converted to a theater and art space. While the show pokes fun at the office life, it also goes a little deeper than just jokes about coffee and deadlines. It's part office comedy, part existential crisis, and part physical and dance-like representation of the daily grind.

The Cubicle was created and is performed by Jeremiah Gamble (Bucket Brigade Artistic Director) and Corey Mills, with direction by Matthew Greseth. Jeremiah and Corey play two employees of Gigasoft Software, a giant software company started by a man named Bill Jobs. The stage is bare except for two three-sided cubicles on wheels, which they cleverly arrange to represent not just cubicles, but also cars, an elevator, treadmills, a stroller, and even a pulpit. It's like an office ballet, and it's obvious that the two actors have spend a lot of time with this piece in the easy and graceful way they move around the space with cubicles and chairs.

All of the rituals of office life are parodied as we follow these two characters through one week of their work lives. Monday progresses to Fridays and the routines (and employees) become increasingly harried and rushed. We also begin to peek inside the lives of these two "work friends," whose conversations never go much deeper than "how's the family?" and "fine." They both have more going on in their out-of-the-office lives that they're reluctant to share over coffee in the break room. One is dealing with a strained marriage, the other with a sick father and a brother in prison. We follow each of them into their individual lives, and meet some of the people in their lives (both actors play multiple characters, differentiated by a small change in wardrobe, an accent, or a different physicality). Events culminate on the weekend, and at least one of our characters learns that perhaps life is more than just traffic and coffee breaks.

One of the fun things about the show is the inventiveness they use to represent the different parts of daily life, which is enhanced by Jeremiah's sound design (complete with elevator music and daily announcements) and Courtney Schmitz's lighting design (I was impressed with the flexibility and variety achieved in this non-traditional theater space). This office world is so engrossing that the intermission only servers to interrupt the flow, and doesn't seem necessary with the short running time.

Unfortunately, I got to this one late - it closes this Saturday! If you're looking for something to do tonight or tomorrow, head to this unique St. Paul theater space to see an inventive, funny, and poignant little play about life inside and outside the office. (See the Bucket Brigade website for more info.)