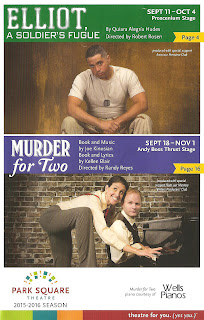 I do not advocate murder, unless it's of the fictional and musical variety. Then I'm all for it, especially when it's as delicious as Theater Latte Da's brilliant production of the Sondheim classic Sweeney Todd, as darkly hilarious as History Theatre's new original musical Glensheen, or as just plain fun as Park Square Theatre's Murder for Two, now playing on the Andy Boss stage. This two-person musical/comedy/mystery is funny, entertaining, and impressive to watch with its multitude of characters seen and unseen, and musical tricks by these two multi-talented performers.

In this delightfully silly murder mystery caper, Nic Delcambre is local cop Marcus who tries to solve the murder so he can make detective, and Andrea Wollenberg is everyone else. She is the wife of the victim, a murder mystery novelist who was shot in the forehead at his surprise party, as well as all of the guests at the party, including a ballerina, a grad student studying criminology, a bickering couple, a psychiatrist, a fireman, and a boys choir. They're all suspects, and Marcus interviews each of them in turn, with Andrea deftly transforming herself with a simple accessory, a change in voice, and a new physicality. It's quite a feat, and she pulls it off beautifully. The two actors seem very comfortable and playful with each other and the audience, ad libbing on occasion and making sure everyone is having a good time. And we are.

Oh, and did I mention that they both play the piano masterfully? And sing beautifully (or not, depending on the character)? Accompanying themselves and/or each other, playing together or separately or seamlessly switching in between, it's another challenging piece of the puzzle that is this crazy good show. Director Randy Reyes and his team (including Music Director Stephen Houtz) have intricately choreographed the show, executed in such a way that it looks easy breezy, which takes an incredible amount of skill, concentration, and practice.

For an extra treat, I saw the show on a "2 Sugar Tuesday." Those of you who've seen the charming and poignant Ivey-winning show 2 Sugars, Room for Cream, written and performed by Shanan Custer and Carolyn Pool (aka the Tina Fey and Amy Poehler of the Twin Cities), know just what a treat this is. In a new program, Shanan and Carolyn play hostess for one performance of many of the shows at Park Square this season. A mere $20 dollars gets you a ticket to the show, a pre- and post-show performance/ discussion/chat with the 2 Sugars ladies, and a free drink! Just look for the "T" on the calendar on each show's page on Park Square's website. Last night before the show Carolyn and Shanan told us a few things about the show and performers, and asked for questions from the audience. After the show, they facilitated a discussion with the uber-talented performers. All while being funny and charming and silly. It's a great deal, and a fun way to bookend an already fun show!

So, to review, go see Murder for Two for a delightfully silly murder romp performed by two nimble actor/singer/pianists/comedians. Then when the next show opens at Park Square, go to the "2 Sugar Tuesday" performance for a fun and unique theater experience. Got it?