"Sweeney Todd" by Theater Latte Da at the Ritz Theater 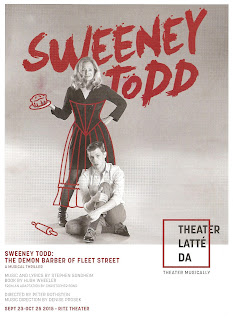 Friends, Theater Latte Da has done it again. They've created a music-theater production that is so stirring and chilling, it's nothing short of brilliant. After the delightfully innovative and stripped-down Into the Woods this spring, they return to Sondheim with a similarly innovative and stripped-down Sweeney Todd: The Demon Barber of Fleet Street. But where Into the Woods was a fun and slightly sinister mish-mash of classic fairy tales, Sweeney is all darkness and death, albeit with a bit of dark humor. Director Peter Rothstein again cast just ten actors in the show, many playing multiple roles and all perfect for the parts, and Denise Prosek leads a pared down orchestra of just four, that still somehow sounds musically full on this gorgeous and disturbing score. With a couple of actors not known for their singing leading this talented cast, and a cohesive look to the set, costumes, and theater space that is well used, this Sweeney is completely engaging and all-consuming, and brilliantly shows what Latte Da can do with not musical theater, but theater musically.

Sweeney Todd is a tale of vengeance and murder, as Sweeney returns to London after 15 years imprisonment for a crime he didn't commit, only to find his wife and daughter gone thanks to the very judge who put him away. His barber business turns deadly as he becomes intent on exacting revenge on those who wronged him. His partner in crime Mrs. Lovett finds a creative way to dispose of the bodies at her pie shop and the two take in the boy Toby, who's just happy to have a home, until he discovers what's really going on. Meanwhile, the young sailor Anthony has fallen in love with Sweeney's daughter Johanna and he and Sweeney team up to get her away from the evil judge. This isn't a happily ever after kind of story so don't expect things to end well, but it's deliciously chilling to watch it all play out.

In Theater Latte Da's production, this sordid story takes place in what looks like a dilapidated carnival. The theme continues from the stage to the lobby of the theater, with slightly off-kilter carnival music playing and donuts sold at the concession stand. Scenic Designer Kate Sutton-Johnson (who also designed the German beer garden fairy tale world of Into the Woods) has built the most terrifying jungle gym you've ever seen on the Ritz Theater stage, complete with ladders, bridges, swings, and a very sinister (yet very cool) slide. The performance space moves beyond the stage as the cast makes great use of the space, wandering through the audience and hanging out with people sitting at the bars on either side. I was afraid they were going to start offering us meat pies (no thank you!). Along with Alice Fredrickson's faded and tattered costumes, and Paul Whitaker's effective lighting design, the whole think has a dark and creepy atmosphere that'll give you chills.


Music-theater (as Nautilus and I like to call it) is about character and story first, and music second (even Sondheim himself agrees). With that in mind it makes sense that Mark Benninghofen and Sally Wingert, two of the Twin Cities' best actors but not known for their singing, play the lead roles. Sally already showed us in Cabaret last year that singing is yet another tool in her vast acting toolbox, and her Mrs. Lovett is so funny, cunning, needy, and dangerously motherly. But this is Mark's first performance in a musical, and all I can say is - welcome to the wonderful world of music-theater Mr. Benninghofen, please stay a while! It's almost incomprehensible that someone would decide to do their first musical 30 years into their career, jump right into one of the most challenging and iconic roles, and do so with such aplomb that it seems like he's been performing in music-theater all his life. The entire cast is wonderful, but the show is called Sweeney Todd and it doesn't work without a strong Sweeney, and Mark is that and more. Fierce, ominous, darkly brooding, murderous yet sympathetic, and with a lovely voice too! Mark and Sally together are, as always, a delight to watch and sound like they've been singing Sondheim all their lives, not an easy trick.

And now for the rest of the cast, who are known for their singing but are wonderful actors as well. I thought nothing could top Tyler Michaels singing "On the Street Where You Live," but Tyler Michaels as Toby singing "Not While I'm Around" does just that, so soaring and beautiful and moving. And he brings his trademark physicality to the role of this eager limping young lad, and also climbs, jumps, and hangs on the set as a member of the ensemble. The lovely-voiced Sara Ochs is almost unrecognizable and terrifying as the beggar woman with a secret, and also portrays her humanity beneath the madness. James Ramlet makes the Judge a villain you love to hate, and the "Pretty Women" duet is a highlight featuring James' yummy low rumbling timbre on the "bum bum bum bum." Elizabeth Hawkinson's Johanna is delicately lovely, and she sings like a nightingale. Also wonderful are Matthew Rubbelke as Anthony, Dominique Wooten as Beadle (with a bit of humorous pounding on the piano), Evan Tyler Wilson as the pompous barber Pirelli, and Benjamin Dutcher in a number of roles.

If you're a fan of Sondheim, music-theater, or just a really well-told story, Theater Latte Da's gleefully maniacal Sweeney Todd is not to be missed. Everything is perfection, top to bottom. An incredible and fully committed cast, spot-on direction, gorgeous music, and attention paid to every detail (watch for Sweeney's entrance, repeated at the end) to create an all-around stunning production. Playing through October 25, get your tickets now before it sells out.