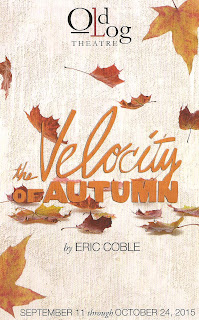 Last spring, I was lucky enough to see Eric Coble's smart, funny, poignant, relevant new play about aging and family, The Velocity of Autumn, during it's short Broadway run. Despite earning Estelle Parsons a Tony nomination, the play didn't last long on Broadway, perhaps because the small, intimate story is better suited to Off Broadway or regional theater than the tourist-bait that Broadway has become. The Old Log Theatre was smart enough to snap up this gem and be the first to bring it to Minnesota to open their 2015-2016 season. The Old Log has really stepped up their game in the last few years, but it's still difficult for me to make the 70-mile round trip from my home in the Northeast suburbs to lovely lakeside Excelsior. But for this play, I was determined to go to my first Old Log opening night. And boy, was my determination rewarded! It was a truly remarkable experience, something I've never seen on stage before, and one that will not soon be forgotten.

The play opens on 79-year-old Alexandra (Melissa Hart), who has barricaded herself in her Brooklyn home, armed with home-made explosives. Her children are trying to remove her from her home and put her in a nursing home, so she’s refusing to let anyone inside. Her long absent youngest son Chris (Paul de Cordova) climbs a tree and into her window in the hopes of talking her down. What follows is an intense and revelatory conversation between these two people, both at a crossroads in their lives and unsure of what’s going to happen next. What Alexandra is really trying to barricade out of her life is age – the loss of herself. Chris is the one of her three children that is most like her, an artist and a free spirit, which is how she raised him. He gives her what she needs – someone to listen to her and acknowledge her fears. Chris has recently experienced a life-changing event of his own, which is why he’s decided to come home, for a chance to “do the right thing.” As they talk about their shared past, and the uncertainty of the future, they come to a bit of an understanding, although nothing is resolved for certain. It’s a clear and precise depiction of one moment in these two people’s lives, lives that existed before this moment and will continue to exist after.*

Melissa Hart is veteran Broadway and regional theater actor - she played Sally Bowles during the original run of Cabaret and received a 1970 Tony nomination for the musical Georgy - and lucky for us, she now calls Minnesota home.  I first saw her in a return to Cabaret, this time as Fraulein Schneider in Frank Theater's delectably gritty production on the Showboat four years ago, and have seen her many times since on various stages around town including Illusion and the Guthrie. Melissa as Alexandra and Paul de Cordova as her son Chris are a dream team to bring this talky two-person play to life. This play demands great listening and presence from both actors as each delivers long monologues, along with overlapping dialogue written in the way people actually talk, and Melissa's and Paul's individual and combined performances are one of the best examples of that I've ever seen at the theater.

Alexandra is continually losing parts of herself, as happens with aging, from bodily functions to words. On opening night, Melissa Hart lost her words, and read from a script for the last half of the show. But she never lost the character, and if anything, it made her performance that much more real and poignant. And Paul was right there with her the whole time, listening and responding and helping her through. The character of Alexandra is flustered and struggles for words and memories, yet has moments of crisp clarity about her life and situation. It was indescribably moving to watch Melissa truly live Alexandra's struggles and triumphs for that brief moment in time. It was the truest example of one of the most poignant lines in the play, "there's beauty and art in the coming apart." Melissa took what she was experiencing in the moment and made it serve the character and the play, that's what a pro does. I'm certain that if you go see this play (and you should), you will see a much smoother performance, but no more beautiful than the one I saw.

An important part of this play is the setting - Alexandra's beloved brownstone in Brooklyn, which is beautifully and realistically represented on the Old Log stage. While the leaves outside the Old Log are not yet changing, I attended the show on a perfect fall day and it seemed that the picturesque setting outside the theater had been brought inside. A huge tree with autumn-tinted leaves is seen behind the large window, and is sturdy enough for Chris to climb on. Tree branches and leaves also frame the stage, which contains a cluttered, homey, lived in apartment with furniture stacked against the door and dozens of Molotov cocktails surrounding the perimeter (scenic and lighting design by Erik Paulson).

Having now seen The Velocity of Autumn twice, at different theaters and with different casts, I'm even more convinced what a beautiful and timely play this is. As the Baby Boomer generation ages, we all have Alexandras in our lives, an aging and beloved parent or aunt who seems to be on the verge of not being able to take care of him or herself. It's a difficult thing to navigate and this play provides one example of one family going through it, without providing any simple answers, because there are none. As medical advances allow us to live longer and longer, we all have to deal with our own aging and that of our loved ones, and hopefully we do so with grace, kindness, and acceptance.

The Velocity of Autumn continues through October 24 and it's well worth the drive out to Excelsior to see this smart, funny, poignant, relevant, beautifully written and acted play.


*Once again, I plagiarized myself by copying the description of the play from what I wrote last year.