"Annapurna" at the Jungle Theater 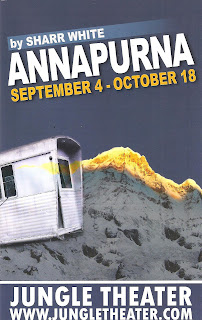 Annapurna is the tenth highest mountain in the world, named after the Hindu Goddess of nourishment. In the new play by Sharr White (see also The Other Place), Ulysses writes an epic poem about his ex-wife Emma in which he uses climbing* Annapurna as an analogy for their long, complicated, fractured relationship. The revelation of the poem comes at the end of 90 minutes of taut, natural, funny, heart-breaking, real, beautiful dialogue between these two layered and well-defined characters. And you couldn't ask for two better actors than Angela Timberman and Terry Hempleman to play Emma and Ulysses. Everything about the Jungle's production of Annapurna, from the set to the acting to the music to the direction to the costumes (or lack thereof), is gorgeous in a starkly realistic yet poetic kind of way.

Ulysses and Emma used to be married, until something happened and she left him. 20 years later she shows up at his door, specifically, the door of his dilapidated trailer home in the mountains of Colorado. They spend the next 90 minutes reluctantly reconnecting and rehashing the past, trying to make sense of where they were and where they are now. The play is written as an intricate and beautiful dance between two people, and Angela Timberman and Terry Hempleman are both so natural, raw, and real in their performances that it just cracks your heart wide open. But don't worry, the play is really funny too! It starts out lighter and more comedic, until secrets of the past are revealed and we get into some pretty heavy territory.

The Jungle always has the best sets in town on their perfect little diorama of a stage, perhaps because often the director and designer is one person, leading to a cohesive picture on stage. But this one takes the cake. Director/designer Joel Sass has placed a very real looking trailer onstage, open on one side, surrounded by dust and tumbleweeds. The entire play takes place within this enclosed space, save for a few wanderings out the door at the back. The trailer is packed from top to bottom with books, clothes, trash, and odds and ends, with functional sinks in the kitchen and bathroom. Usually when you walk into the Jungle the curtain is down, but this time there is no curtain, allowing the audience to take in the set before the show starts. It was all I could do not to hop up on stage and explore, although it's so realistic I would've been wary of smells and roaches. This detailed set brings Ulysses' world to life in a very authentic way.

Annapurna is a smart, funny, poignant, heart-breaking, beautiful play, and the Jungle's production is everything you could ask for. It plays through October 16 so you have no excuse not to see this gem of a production. Trust me, just go.


*For more about climbing mountains and relationships, see the upcoming movie Everest, based on Jon Krakauer's riveting Into Thin Air and other books about the deadly 1996 climbing season. I will be.