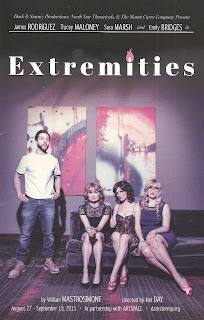 With their sixth production in the three-year life of the company, Dark & Stormy once again delivers a short, intense, well-acted and directed play in an unconventional space. But Extremities has none of the dark humor that could be found in some of their past shows. It's all violence and drama and complex moral questions. This 1982 Broadway play turned 1986 movie starring Farrah Fawcett explores the weighty themes of sexual violence, power, and justice. There's no clear winner in this story, no obvious right and wrong, just a lot of grey area, where most of us live. Each of these four characters, beautifully portrayed by this excellent cast, is at times sympathetic and at times infuriating in their words and choices. More than 30 years after it was written, Extremities is as relevant and topical as ever.

I don't want to say too much about the plot because you really need to watch it unfold unspoiled, but it centers around a woman named Marjorie who is attacked and nearly raped by a stranger in her home, until she's able to gain the upper hand with plans of enacting justice on her attacker. Her two roommates come home to find an injured man tied up, and aren't sure what to believe. The three women have very different perspectives on the situation, and it's fascinating to watch them struggle with what to do. Terry is scared, then becomes annoyed and doesn't want to sacrifice for Marjorie. Patricia applies her social work techniques to talk everyone through it and try to work out the best possible solution. Marjorie is just trying to survive in the only way she knows how. The attacker-turned-victim tries to sweet talk each of them in turn to get away, belying the monster we meet in the beginning of the play.

Smart young director Mel Day brings a clarity to the murky waters of the play and works well with the four-person cast, each of whom brings their A game. Artistic Director Sara Marsh gives a brave and raw performance as Marjorie, going from a terrified woman at the worst moment in her life, to taking control of the situation, and turning into an unforgiving force. Also excellent as the two roommates are Tracey Maloney (a familiar face on Twin Cities stages) and Emily Bridges (yes, she's Beau's daughter, but also a welcome newcomer to the local theater scene). But perhaps most impressive is James Rodriguez as Marjorie's would-be rapist, somehow bringing some humanity to the role. He makes this man truly terrifying during the attack, then charming and polite as he tries to talk his way out of it, and finally, he's absolutely devastating as this criminal faces what he's done.

The play is staged in Dark & Stormy's temporary new home in the Grain Belt Warehouse in Northeast Minneapolis. The stage is not so much a stage as a living room in a corner of the intimate space, with just a few rows of chairs on two sides. You're right there in the room with these characters and inside their dilemma. The attack scene is brutal and terrifying to watch, with intricate fight choreography (by Annie Enneking) well performed by James and Sara in a way that's almost too real, especially when viewed up close and personal. There are some nifty stage magic tricks that make the results of the violence visible in a very realistic way.

I'm not sure that the way we talk about rape has changed all that much in 30 years. Hopefully it's more acceptable to talk about it at all now (see also Bill Cosby), but unfortunately we still hear talk of blaming the victim because of how she dresses or acts around men, and the difficulties of getting justice through the legal system in what sometimes amounts to he said/she said. At its best, theater can start a conversation about important, relevant, difficult issues, and that's what this play does, without offering easy answers. Extremities continues through September 19 (Dark & Stormy shows tend to sell out in these small spaces, so get your tickets in advance).