"Take It With You" at The Underground

I'm sitting here in the warm and inviting Solglimt Bed and Breakfast, staring out at the blue-gray waters of Lake Superior, on a mini mid-week vacation. And what brings me to lovely Duluth, Minnesota's favorite in-state getaway? Theater, of course. Tonight I will make my first visit to the Renegade Theater Company to see the new musical Eastland, but my first stop was my second time watching the delightful radio show called Take It With You. Now in their second season, TIWY was created by Blake Thomas and Mary Fox (whom you might remember from Yellow Tree Theatre, Theater Latte Da's Our Town, or various other theaters in the cities before they decided to leave us and take their talents to the North Shore). This super talented couple along with some super talented friends write, perform, produce, record, and upload an hour-long episode every month, which you can (and should) listen to for free here!

Take It With You is a scripted show that follows a group of charming oddball friends centered around a Cheers-like bar in Duluth (at least until they tore it down to make way for a baseball field, more on that later). There's romance, adventure, comedy, a bit of social commentary, a visit from Mayor Don Ness, a conversation with local business owners, and of course, music! Many of the songs are Blake Thomas originals (if you like country, folk, Americana, singer-songwriter, or just good music in general, you'll want to check out his albums on iTunes), along with traditional song, standards, or whatever fits in with the theme of the episode. Episode 13 is all about baseball, so we were treated to songs about Jackie Robinson, Joe Dimaggio, and a sing-along to "Take Me Out to the Ballgame."

In this episode, the gang is challenged to play a game of baseball against a Little League team sponsored by the rival bar across the street. The stakes are high; if our team wins, the rival bar closes up shop. They decide to tear down the bar and build a baseball diamond in a cornfield in the hopes of attracting some baseball stars, but all they manage to attract are the cast of Field of Dreams, who actually can't play baseball. A few "sports montages" later and the game is over, as is the episode, with a whole lot of fun had by all. Including the large and loyal in-person audience and the cast that lends their musical, vocal, and sound effect making talents to the story - Blake, Mary, Katy Helbacka, Matt Helbacka, Ryan Nelson (with a hilarious array of voices from a little girl to James Earl Jones), Lane Prekker, and Zach Stofer (with Abe Curran on bass). It's so much fun to watch them create this wonderfully silly and very specific fictional world through voices, music, and sounds.

After more than a year and 13 episodes, the TIWY crew is like a well-oiled machine, which allows lots of room for playing around and having fun. "Live radio theatre" is a unique concept in this day and age, and TIWY is a unique product. It's fun and entertaining, with loveable oddball characters, great music, and support of local Duluth culture and businesses. Give it a listen and you might just get hooked. Every episode ends with the cast taking turns on the 1930s folky song "Sitting on Top of the World," which perfectly sums up the feeling this show evokes. 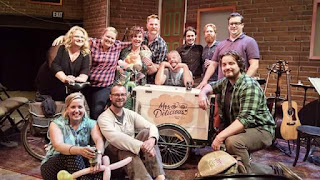