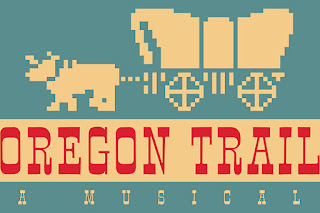 Summary: A musical based on the computer game Oregon Trail*, in which a group of intrepid pioneers try to survive a wagon train West.

Highlights: I'm so old that I remember a time before computers, and I clearly remember when my elementary school got its first computer. We had a contest to name the computer (yes, kids, we had one computer for the whole school), and the winner was ETC - Extra Terrestrial Computer (this was clever in the early '80s). The only thing I remember doing on this computer was playing Oregon Trail, and it was the coolest thing ever. Literally Entertainment has turned that very sense of nostalgia into a musical, with great success (they sold out their last two performances and received the encore, which I attended). What a thrill that must be for first time Fringer Kyle DeGoey, who wrote the book and lyrics, directed the piece, and played percussion (with keyboard accompaniment by Lindsey Fallenstein). Everyone in the fresh-faced young cast is so delightfully and campily earnest in their portrayal of these trail stereotypes as they encounter obstacles along the way but never lose their determination. The original songs are fun and catchy and very musical theater-y; it's just an all-around fun show. I think it's safe to say that Oregon Trail: The Musical is the surprise hit of this year's Fringe!