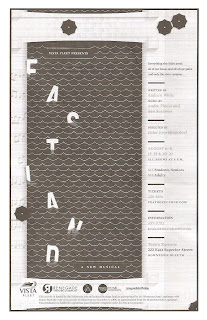 Have you ever heard of a ship called the SS Eastland? Neither had I, which is strange because in 1915 the ship rolled to its side and sunk to the bottom of the Chicago River, trapping many of the 2500 passengers below deck as the ship filled with water and resulting in the death of 844 of them, the most deadly disaster on US soil until 9-11. Maybe it's become overshadowed in history by the sinking of the Titanic, which was even more deadly and more glamorous, with many rich and famous on board. Whatever the reason that this disaster is mostly unknown, the Eastland Disaster Historical Society is working to change that. To find out more about this horrific event, you can visit their extensive website, read any number of books, or go see a musical. It just so happens that music-theater is my favorite way to learn about history, and I feel so fortunate to have seen Renegade Theater Company's beautiful production of the new musical Eastland, just the second production of this piece that premiered at Chicago's Lookingglass Theatre. What better way to tell this very human and very tragic story of hope, loss, love, grief, and survival than through music and theater?

As the lights came up on stage to reveal Blake Thomas and David Darrow with guitars in their hands, I knew I was in the right place, even though I was in Duluth, about 150 miles from where I usually attend theater. I'd been hearing about Renegade for a while, and this was a perfect first experience with them. The fact that they found this new musical, brought it to Duluth (a town that's no stranger to shipwrecks), and took a chance on it, speaks a lot to who they are as a company. A look at their list of past shows reveals some interesting and challenging selections, and I like that. I wasn't sure if a town the size of Duluth could sustain the level of talent we're used to in the Twin Cities, but judging by this excellent cast, it can. UMD has a great theater program (a few of the cast members are students), and that bleeds out into the community. Plus, 150 miles isn't really so far.

This is not a linear story, a mere recitation of facts and timelines with music. Rather it's a collection of stories. Stories about the disaster itself as experienced by different people on the ship and in the community, and stories about life before the disaster. Stories of these real people's lives that are messy and complicated and wonderful, as life is. Obviously not every story can be told, but the musical creates clear pictures of who some of these people were and what was lost that day, and evokes more emotions that the number 844 ever could. If there is a main character, it's 13-year-old Bobbie (played by Jenna Kelly, and whose granddaughter started the Historical Society with her husband and was at the performance I attended). Through Bobbie's eyes we see all of the excitement of the day, the despair as she's separated from her family and trapped below deck, and the determination to survive. We also meet Ilse (Rachael Ronding), a woman who feels trapped in her expected life of work and family, until she meets a grocer (David Darrow) who shows her that life can be more. There's the ship's captain (Blake Thomas), who refuses to take the blame, an undertaker (Scott Hebert), and a teenager named Reggie (Dylan Rugh) who puts his talent for holding his breath to use recovering dozens of bodies from the water as he imagines his idol Harry Houdini (Zachary Stofer) challenging him to stay down longer.

All of these stories of past and present are clearly and cleverly intertwined by book writer Andrew White, who also wrote the lyrics. The gorgeous music by Andre Pluess and Ben Sussman is evocative of the early 20th century time period, at times haunting and at times driving (the standout "Into The River"), and is a well-constructed musical theater score with recurring themes ("things tip, they lean"), character solos, lovely duets, and thrilling group numbers. But the show is so fresh and new, the score wasn't really written down. Music director Blake Thomas provided new orchestrations for this production, with a band consisting of two guitars, an upright bass, piano, and an occasional mandolin. Renegade performs in an intimate space at Teatro Zuccone in downtown Duluth, a space that requires no microphones. It's a rare thing to see unmiked performers in a musical, but it's the best way to hear music. There's something about the unamplified human voice that is so effective in conveying the true emotions of the piece. The sound mix is perfect; I wish all musicals could be performed like this. The tiny space also brings the audience close enough to see the fear, hope, despair, and wonder in these marvelous actors' eyes. And with no intermission to break into the flow of the story, it's an incredibly compelling and affecting experience.

Director Peter Froehlingsdorf, who found Eastland and brought it to Renegade, keeps these complicated layered stories and the large cast moving in the small space. The stage is made of uneven surfaces with trap doors, appropriate for a ship that tips and leans, with spaces on the sides used for flashbacks and the band housed in the back section of the stage. A couple of beautiful effects include the diving "human frog," using a harness and pulley system, and characters hanging drenched clothing over a washtub as the water pours off of them and the undertaker pins a number on them, representing some of the 844 victims. It's a powerful and haunting effect.

Eastland is a beautifully written new musical, one that doesn't feel rough or unfinished, but fully formed and complete. Renegade's production is extremely well done and well received - the closing weekend is sold out. I believe this rich piece has a future and hope to see it performed in theaters around the country, particularly here in the Twin Cities. It's a story that deserves to be heard, especially when this well told. "Is there any better way to pass the time?" For me, there is none.


Things shift, they change
That's life, it rearranges
Things tip, they lean
'Till you find you're between
Something old and something new
Change is good for you