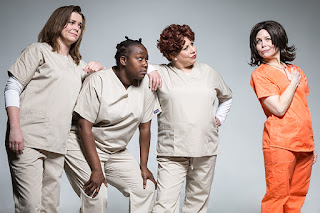 Summary: A musical political satire in which former Minnesota congresswoman Shelly Bachberg is running her 2016 presidential campaign from prison.

Highlights: If you saw the 2013 Fringe hit Shelly Bachberg Presents: How Helen Keller and Anne Frank Freed the Slaves: The Musical, then you know what to expect. But you don't need the background to appreciate this smart, funny, ridiculous political satire that also includes TV and musical theater references while delivering a half dozen fantastic new songs. This is the third new original musical by creative team Max Wojtanowicz (book and lyrics), Michael Gruber (music and additional lyrics), and Nikki Swoboda (direction and more), and the experience and teamwork shows in this ridiculously funny show that's a mash-up of the Netflix hit Orange is the New Black, musicals like Chicago and West Side Story, and the worst that politics has to offer. And the cast is to die for. The incomparable Kim Kivens reprises her role as Shelly from the first show, and I can't imagine anyone else in the role. Her parody of you-know-who is spot-on hilarious and her vocal control is impressive as she sings to great comedic effect and delivers Shelly's ridiculous lines with campy convictions. She's backed by three music-theater divas as her cellmates - Kendall Anne Thompson as Viper, Joy Dolo as Lazy Eyes (having a lot of fun with Crazy Eye's unique mannerisms), and Erin Schwab as the Russian Bread. Along with Todd Bruse as a guard and campaign manager, they take you through this silly tale of Shelly winning over her cellmates and escaping to become president, inspiring catch phrases along the way like "you can even" and "hashtag blessed." This show is a great example of the Fringe musical at its best.