Fringe Festival 2015: "Underneath the Lintel" 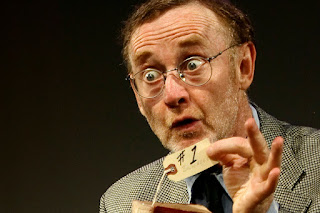 Title: Underneath the Lintel

Summary: A mild-mannered librarian goes on a quest that finds him traveling the world in search of the mythical Wandering Jew.

Highlights: Pat O'Brien brings his excellent one-man show back to the MN Fringe (I saw it four years ago). On the surface it's a funny and quirky little play about a Dutch librarian who becomes obsessed with a book that was returned 123 years after it was taken out. He follows a clue left in the book which leads him on a chase around the world, collecting even more clues. He's assembled and labeled all of the clues and gives us, his audience, an "Impressive Presentation of Lovely Evidences," using slides, audio recordings, and frantic scratchings on a flipchart to bolster his case that this man he's following is indeed the Wandering Jew, condemned to wander the earth, never resting, never dying. So you see it's not such a simple story after all, but a profound one that ponders the very big ideas of the meaning of life and death. Pat O'Brien, having performed the piece at festivals around the country, gives a masterful performance. From the moment he walks onstage about ten minutes before showtime, nervously setting up his display, he has us believing he is this man. He becomes increasingly more frazzled as the "presentation" goes on, urging us, or maybe himself, to believe... in something. Why are we here? Why do we die? How can we possibly know how one small choice made "underneath the lintel" can affect the rest of our lives? Pretty heavy stuff wrapped up in a quirky and funny little play.