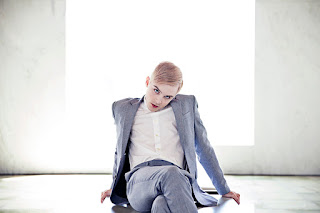 Title: The Picture of Dorian Gray

Summary: A modern adaptation of Oscar Wilde's novel about a cold, cruel, beautiful man and the artist who's in love with him.

Highlights: As in last year's One Arm, director/scenographer Joseph Stodola once again presents a stylistically beautiful and ambitiously staged drama with a cast full of fantastic actors. The show opens with a sort of dark dance as the characters move around the stage, fight, and create beautiful pictures (movement by James Kunz). All are dressed in black, white, and gray, and florescent lighting is well used to create some stark images (lighting by Karin Olson). The whole look of the show is sleek and cool, which matches the tone of the story. Dorian (Trevor Goris) is not a likeable character - selfish, conceited, cruel, and obsessed with the idea that his picture should age while he remains young and beautiful. He has poor Basil, the artist (Caleb Fritz Craig), under his spell, parties with buddies Harry (Casey Hoekstra) and Alan (Ryan Colbert), and does not treat the women in his life well (Alexandra Dorschner and Kieherra Laing). Things take an ugly and violent turn but Dorian remains beautiful on the outside in this well-realized concept that leaves one feeling cold.