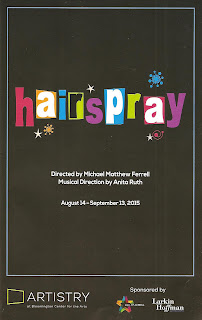 Bloomington Civic Theatre has recently rebranded themselves as Artistry, and they've set the bar pretty high for the new direction of the organization. Their first production, a new take on the old favorite Hairspray, is fun and lighthearted, has a powerful and very relevant message about equality and self-love, is performed by a dynamic and diverse cast, and is directed and choreographed with great energy and spirit. It's an all-around wonderful show and is sure to be a smashing success (get your tickets now before they sell out). If Hairspray is any indication, I expect Artistry's inaugural season* to be the top-notch!

At this point I'm sure everyone's seen some version of Hairspray, whether the original movie, the musical based on the movie, or the movie based on the musical based on the movie. Normally this would be a recipe for disaster, but this story is so rich and music-filled that each iteration works. Despite not looking like the prim and proper skinny girls on her favorite TV show, The Corny Collins Show (think American Bandstand), Tracie wins a spot on the show and begins to dance on TV. She can't understand why her "colored" friends can't be on the show, so she arranges a protest and is promptly thrown in jail. But she gets out, continues towards her goal, wins the boy of her dreams, and achieves racial harmony through dance.

What does a 2002 Broadway musical based on a 1988 movie set in 1962 have to do with 2015? As it turns out, a lot. Tracie Turnblad is a heroine for the ages, proving that a young woman who doesn't meet society's standards of beauty can live a happy and fulfilling life, fall in love, and enact social change (all while dancing and singing!). And more than 50 years after the fictional events of the show take place, we are still traveling that road towards racial equality. The protest scenes include signs saying "Black Lives Matter" and "Hands Up, Don't Shoot," landing the show squarely in the present day and bringing an even greater poignancy to the song "I Know Where I've Been." Lyrics such as "there's a road we've been traveling, lost so many on the way" and "there's a struggle that we have yet to win" mean even more today. And somehow singing "I Love You Baltimore," and the entire show that's based on John Waters' love letter to his hometown, takes on a deeper meaning after the events that played out there earlier this year. I was moved to tears several times, which is a rare thing in musical that's also this much fun.

Artistry has compiled a fantastic cast, and it's nice to see some new faces among the familiar ones. Starting at the top, Gracie Anderson is everything you could want in a Tracie Turnblad. She can sing and dance with the best of them, but more importantly, she has great charisma and winningly portrays Tracie's huge heart and spirit. As teen heartthrob Link, Nicholas Kaspari is no Matthew Morrison (who is?), but he's got some smooth moves and oodles of charm, and makes Link worthy of Tracie's affection. It's refreshing to see parents as loving and supportive of their daughter and her crazy dreams as Tracie's parents are. Brandon Caviness is fabulous in this role of a lifetime as the hausfrau Edna who learns from her daughter that it's not too late to take her place in the world, and Alan Holasek's Wilbur is all sweet and lanky awkwardness. The two of them make a charming and "timeless" couple.

2014 Spotlight Award winner Angela Steele proves she's more than worthy of that honor with her terrific performance as Amber, the mean girl everyone loves to hate (and she looks like a blond bouffanted Cristin Milioti). Catherine Noble is hilarious as Tracie's gum-popping sidekick Penny. Is that Melissa McCarthy stealing scenes in a number of roles from the president of the hairspray company to a cop? No, it's Meagan Kedrowski, but she coulda fooled me with her very specific comic creation of these characters, complete with funny voices and weird faces. Last but definitely not least, Bey Jackson's performance as Motormouth Maybelle, and specifically his rendition of the aforementioned Civil Rights anthem "I Know Where I've Been," is a thing of inspiring beauty.

A hallmark of BCT/Artistry is their traditional pit orchestra let by Anita Ruth, but in this show it's so much fun to see them on stage like a big band on a TV show, sitting behind the Painted Ladies of Baltimore on this simple but effective set by Erica Zaffarano. Ed Gleeman's '60s period costumes are fabulous and might make you miss Mad Men a little less, with the men in sharp suits and the women in lovely full-skirted dresses (several of which I would like to own). And kudos to wig designer Paul Bigot for creating the appropriately over-the-top hairsprayed hairdos.

When the director is a choreographer and a former American Bandstand dancer, you know there's going to be some amazing dancing in the show. Michael Matthew Ferrell has teamed with choreographer Kristin Iiams to create a fun and fast-moving show with such sharp, fast, fun, and very '60s dancing that I wish I were born a few decades earlier. In the capable hands of dance captains Emily Madigan and Krysti Wiita and this dynamic young cast, the dancing is a joy to watch. Warning: it's hard to sit still watching this show!

Hairspray is a show that's been done many times in the last 13 years, so you might wonder, why now? Artistry answers that question by bringing a feeling of relevance and immediacy to this poignant and moving story wrapped up in fabulous '60s song and dance. And it's a beautiful thing to see such diversity on stage and in the audience, especially at a theater in the suburbs (other suburban theaters - take note!). Hairspray continues through September 13, get your tickets now because they're going to be hard to come by (also check for discount tickets on Goldstar).

*The musical theater season continues with Yeston and Kopit's Phantom, The Best Little Whorehouse in Texas, and Fiddler on the Roof. Also check out the plays in Artistry's black box theater.