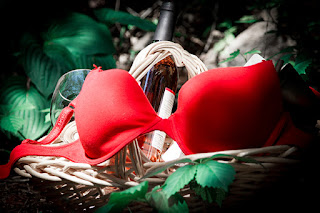 Summary: A fun Friday night with a group of college friends turns serious as they're able to open up about sexual assault through the fairy tale Little Red Riding Hood.

Highlights: These five women (Becca Hart, Hannah Neville, Kiara Jackson, Nastacia Nicole Foster, Sarah Parker) are all really natural actors and feel like friends, and there's a light-hearted party atmosphere for the first half of the show as they talk and joke and drink, preparing to go to a party. They're also all great singers as they sing meaningful and well-constructed montages of pop songs. Things turn a little serious about halfway through when one of the girls, Sorrel, asks the other girls to write a story as if they're Little Red Riding Hood to help with an essay she's writing. They're all beautifully written and filled with hidden meaning. Finally Sorrel is able to tell her friends why she doesn't want to go to the party, because she was sexually assaulted at the last party. This allows others to share their stories, listen, and support each other. Reinventing the Wolf doesn't get too deep into the issue of campus sexual assault, but it does allow for a conversation to begin and an acknowledges that this is part of college women's experience and needs to be addressed.