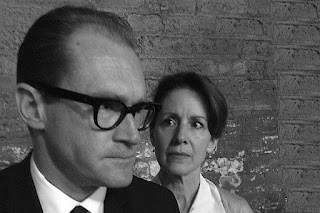 Summary: The story of Nazi war criminal Adolf Eichmann on trial in Israel is told along with the Milgram experiment that tested just what people would do when ordered.

Highlights: Friends, this one is intense. The Consolation is not your typical fun and frivolous Fringe show. The story of a Nazi war criminal on trial may not be new, but it's beautifully and succinctly told in this thought-provoking play that lays bare all of the complexities involved and leaves the viewer with an unsettled feeling. Eichmann is at times infuriating and at times sympathetic, thanks in part to a brilliant performance by David Mann. Scenes of the trial in front of an unforgiving judge (Jim Pounds) are interspersed with scenes talking to an unnamed visitor (Jennifer Blagen) who seems to be trying to understand how one can be driven to do such horrific things, which Eichmann tries to explain was just a bureaucratic job to him (seen in flashbacks with his assistant, played by Clarence Wethern), despite the fact that millions died as the result of his paperwork and meetings. And then there's the experiment. Dr. Milgram (Edwin Strout) asks the subject (Robb Krueger) to deliver increasingly greater shocks to a person in another room, and even though he's disturbed by the pain he's inflicting on this stranger, he continues. The play is well constructed by playwright Ari Hoptman, with scenes and timelines intersecting and flowing into one another. Clear direction by Jean Wolff and great performances by the cast bring this story to life in a disturbing way. The Consolation is a heavy drama, beautifully done, that makes one think not just about the crimes at hand, but the complicated idea of following orders vs. following your conscience.