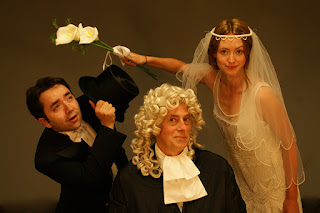 Summary: Comedy operetta geniuses Gilbert and Sullivan's one-act operetta about a farce of a jury trial, performed by a company that specializes in G&S.

Highlights: A huge singing cast and 10+ piece orchestra on stage doing opera at the Fringe? Yes, please! Trial by Jury may be short (about 40 minutes), but it's a tasty treat. If you're a fan of G&S (see also the Ordway's upcoming production of Pirates of Penzance), you'll love this little ditty about a man on trial for "breach of contract," i.e., leaving his fiance for other women. A jury of eight men, a crowd of people watching and commenting, the defendants and lawyers, and a drunken judge all come together to sing songs that are very G&S - fast, clever, tongue twisting lyrics with repeated phrases. The fantastic cast includes the hilarious Steve Hendrickson as the judge in the overly powdered wig (so happy to see him on stage again after missing him in Sherlock Holmes), Felix Aguilar Tomlinson as the defendant, Grace Lowe as his would-be bride, and Jim Ahrens as her lawyer. It's a joyous celebration!