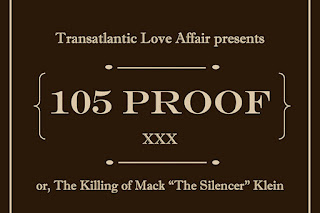 Title: 105 Proof or The Killing Of Mack "The Silencer" Klein

Created by: Diogo Lopes and the ensemble

Summary: A young man from a small town gets involved with a Chicago mob when he begins to sell his grandfather's moonshine during Prohibition.

Highlights: Transatlantic Love Affair applies their beautiful and evocative physical theater style to an original story that's a bit darker and more dangerous than their past shows. This story of how a small town boy becomes a Prohibition bootlegger still has plenty of lovely moments in the way this eight-person cast creates everything in this very specific world using just their bodies and voices, with no props or set. But there's also a sense of danger and suspense as the stakes keep getting higher for the ambitious Jonathan and his brother as they get deeper into the world of the Chicago mobsters. The human moonshine still is impressive, the car chases are playful, the creak of the door is consistant, and the gunfights are so fast and sudden and lifelike that I wanted to hit the rewind button and watch them again. 105 Proof has all of the playfulness and inventiveness we've come to expect from TLA, but applied to a story that's not so dreamy and more sinister, deepening the range of stories TLA can tell. The cast is, as always, beautifully specific in their creation of multiple characters and inanimate objects, and it's nice to see some new faces (Amber Bjork, George Dornbach, and Eric Marinus) alongside TLA veterans (Heather Bunch, Peyton McCandless, Derek Lee Miller, Allison Witham, and Nick Wolf). If you've never seen a TLA show before, what are you waiting for? And if you're a die hard fan like I am, 105 Proof will show you another side of them.