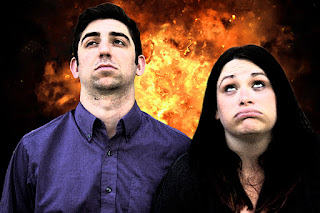 Highlights: What happens when two funny people get married, and then they fight? Judging by Couple Fight, it's hilarious, at least it is to those of us watching, and probably also to the couple once they move beyond the moment. Such is the simple premise of this show that features five married couples and one pair of BFFs. John and Lacey Zeiler fight about him faking a stroke in Vegas to help him win at poker, and not telling her about it beforehand so she could play along. On one of their first dates, Maggie and Marissa Sotos argue about whether a book is a hamburger or a hot dog (first of all, it's a book, second of all, it's obviously a hot dog). Emily Schmidt and Maureen Tubbs' disagreement about the rules of Pictionary turn a fun girls' night into a dramatic scene (I'm with Maureen on this one, you gotta have rules). Laura Zabel and Levi Weinhagen fight about whether Laura's suggestion for a sketch is funny (for the record - it is!). Lizzie Gardner gets mad at Bobby when he farts in the middle of a deep conversation. And finally, Anna Weggel-Reed gets upset that husband Tom (played convincingly by Adam Hummel because Tom was too busy directing) doesn't properly celebrate her on her birthday. The rest of us non-comedians only wish we could fight this funny!