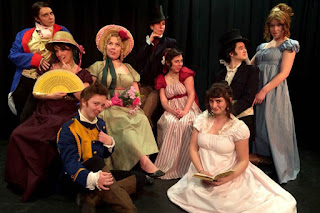 Summary: A nine-woman cast improvises a Jane Austen-esque story based on a title suggested on Facebook or Twitter and names suggested by the audience.

Highlights: The play I saw was titled Vanity and Virtue - it sounds like a book Jane Austen would have written, doesn't it? The story of the Pembletons and the Sethwaites (there was some confusion about this suggested name) includes all of the requirements of a Jane Austen novel - cousins, a flighty sister, a bookish sister, visits to the country, a scandal, an eccentric aunt, a hidden fortune, sudden proposals, walks in the garden, and witty dialogue. All of the women in the cast (half of whom play men) are fantastic improvisors and play off of each other well. And they speak in (slightly modernized) 19th Century language. What else is there to say - it's fresh, funny, and very Jane Austen.