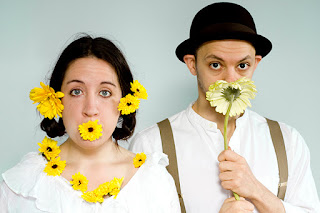 Summary: This husband and wife physical theater duo from New York tells a story of an immigrant girl and a boy with big dreams, inspired by the writing of Willa Cather.

Highlights: The story is similar to My Ántonia, but with a few twists. Petuna (Ántonia) meets Chicken (Jim Burden) when they're children on the Nebraska prairie, with dreams of their future that may or may not come true. Carrie Brown and Karim Mausher play all of the roles in the story (both human and inanimate), with only a scarf and a hat as props (Minnesota Fringe regulars might recognize them as a two-person Transatlantic Love Affair). Willa Cather's writing is so evocative of a certain time and place in our country's history, filled with wistful nostalgia for a world that no longer exists (see also Illusion Theater's production of My Ántonia). This show captures that feeling, but with a bit more humor and light mixed in with the drama. Carrie and Karim are just delightful to watch as they transform from old people to children to animals to the waving wheat, and and to listen to as they sing old-timey songs. A beautiful story beautifully and inventively told with physicality, music, heart, and humor.