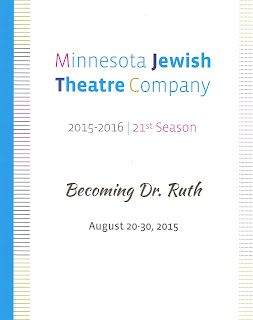 Everyone knows Dr. Ruth, the famous sex therapist and '80s TV and radio icon. But what do we really know about her, other than that she's diminutive, heavily accented, able to speak frankly about formerly taboo subjects, and always grinning and cheerful? The new play Becoming Dr. Ruth reveals just what a fascinating life she's lead as a young girl orphaned by the Holocaust, never forgetting the importance of education instilled in her by her father, or the love and support of her mother and grandmother. A true survivor, she forged a successful new life for herself and became the Dr. Ruth we know today. This funny and poignant one-woman show does a wonderful job of creating a portrait of the woman behind the icon.

Playwright Mark St. Germain (see also Freud's Last Session) has written Dr. Ruth's life story as a conversation between Dr. Ruth and the audience. There's no fourth wall, as she candidly speaks directly to the audience, saying "I love to go out to the theater, today, the theater comes to me!" The play is set in 1997 as Dr. Ruth is packing up the apartment she's lived in for over 30 years, triggering a flood of memories that she shares with the audience. Born in Frankfurt, Germany in 1928, she recounts her days as part of the Kindertransport to Switzerland, moving to Palestine and fighting in the Israeli War of Independence, her three marriages and two children, and her endless pursuit of education, eventually becoming sex therapist to the nation through her radio and TV shows. It's a life both ordinary and extraordinary, filled with unspeakable tragedies as well as everyday struggles of love, family, and career.

When I first read that 25-year-old Miriam Schwartz was cast as the 69-year-old Dr. Ruth, I have to admit, I was skeptical. But any doubt is erased within minutes as Miriam takes the stage in full Dr. Ruth mode, and has the audience in the palm of her hand for 90 minutes. She perfectly captures this iconic woman's indomitable spirit, boundless cheerfulness, energetic shuffling walk, and frank and honest sex advice delivered in that familiar German-Israeli-French-American accent. Miriam has completely transformed herself and is an absolute delight to watch as she brings Dr. Ruth to life before us with humor and poignancy.

Of course, a one-person show is never just that, and Miriam has great support in director Craig Johnson, who keeps her busy moving around the apartment set, packing up memories; scenic designer Kirby Moore who has created a cluttered, homey, lived in set; and dialect coach Foster Johns to help her get the accent down pat.

This summer show opens Minnesota Jewish Theatre Company's 2015-2016 season and runs for just seven performances. Catch it while you can* to see a funny, poignant, sharply written play about America's most trusted sex therapist who turns out to be much more than what she seems, with a wonderful performance by Miriam Schwartz as the star of this one-woman show.


*Note that Ford Parkway is closed between the theater and Snelling, so plan accordingly and allow time to navigate detours.