Fringe Festival 2015: "Collyard / Nelson's Guide to Reviewing Fringe Festival Shows & Other Tips to Help Keep Your Cool In the White-Hot World of Amateur Criticism OR "So You Kept Their Postcard; Now What?"" 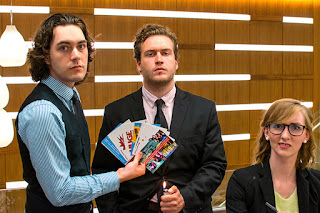 Title: Collyard / Nelson's Guide to Reviewing Fringe Festival Shows & Other Tips to Help Keep Your Cool In the White-Hot World of Amateur Criticism OR "So You Kept Their Postcard; Now What?

Summary: This is not a show but rather a seminar required by law for anyone with a Fringe button, led by top advertising team Collyard/Nelson.

Highlights: As an amateur theater reviewer at all times of the year, not just during Fringe, I was eager to attend this seminar to pick up a few tips. Here's what I learned from Alex and Cody, and their intern Sammy. Art exists in a vacuum... or maybe not in a vacuum. Art has no value until critics say something about it. There are three types of reviews: comparison reviews (this is not as good as that), expectation reviews (I thought this was going to have music but it doesn't), and crazy talk (angry words in all caps). Artists like reviews because they tell them if what they're doing is good or bad, and make them better people and artists. Amateur and professional reviewers are exactly the same, except one of them gets paid to do it. Just keep writing reviews until you get to that place where you feel like you've run out of words (been there, done that). Special guest Emily Schmidt, who has written six Fringe shows, including this year's The Mrs., read some actual scathing reviews that she's gotten. Her (sensible) tip is not to write anything that you wouldn't say to the person's face. Intern Sammy's tip is to think of shows as gifts from your aunt - maybe it's not right for you but it might be right for someone else. OK, breaking from the joke for a moment, this is a very clever idea for a show, very meta-Fringe, and very funny. At least to this amateur reviewer.