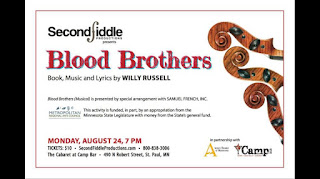 As far as I know, Second Fiddle Productions is a one-of-a-kind theater company in this town of 70+ theater companies. They are exclusively dedicated to producing one-show-only readings of rare and unusual musicals. Founded by the talented Ruthie Baker (currently a resident of River City at the Guthrie), the company is now in their second year and I finally was able to go to one of their Monday night readings - the 1983 West End hit Blood Brothers. After just eight hours of rehearsal, this ten-person cast full of the Twin Cities top music-theater talent breathed such incredible life into this script and score that I wonder why it isn't produced more often.

Blood Brothers was is set in and was first produced in Liverpool. The titular brothers are twins separated at birth when their poor single mother is convinced into giving one of them to her wealthy and childless employer. Despite their very different lifestyle, the boys meet on the streets of Liverpool and become fast friends, each admiring and envious of what the other possesses. But as they grow up, the extreme difference in their situations becomes more evident as one brother has a successful career and the other turns to crime to feed his young family. But in the end what could come between these best friends and unknowing twins? A woman, of course, and the fight over her results in the death of both brothers.

The story ends tragically but there is fun and humor along the way. I'd never heard any of the songs before but I think the score is great, with an '80s English musical sort of sound. I love how the comparisons to Marilyn Monroe turn from joyful to sad, as does the dancing song. The recurring theme of the devil at your door and the superstition about bad luck with new shoes on the table casts a dark cloud on the show, reminding us of the upcoming tragedy even through the happy times and good humor.

Since this is a reading, I'm not supposed to write a review (although I'm not sure that what I usually write are really reviews), so I'm not going to tell you how amazing this cast is and how incredible and fully formed their performances were even though they only rehearsed for eight hours and were often reading from the book. I'm especially not going to tell you how fabulous Jen Burleigh-Bentz was as the mother, or how adorable Eric Morris and Reid Harmsen were as the brothers, or what a great job Josh Campbell and Nic Delcambre did as Director and Music Director/accompanist, respectively. Nope, I'm not going to tell you that, but I am going to tell you that if you're interested in expanding your musical theater knowledge by watching top-notch local talent "read" a musical you may never have heard of before, keep your eye on Second Fiddle. Their final reading of this year is The Most Happy Fella in October, with their third season announcement coming soon. Stay tuned to their Facebook page for details.