"The Music Man" at Guthrie Theater 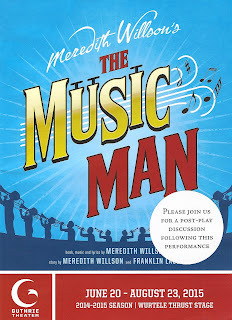 The Guthrie Theater's production of The Music Man is the reason why people who love musicals love musicals. And since I'm a person who loves musicals, I love everything about it! I loved the movie as a kid, and recently fell in love with the piece anew when I saw Ten Thousand Things' sublimely sparse and spellbinding production last year. On the opposite end of the spectrum is the Guthrie's big, bold, glorious show, with a huge cast of old and new favorites, breathtaking sets and costumes, those beloved familiar songs, spirited dancing, and a real live marching band! Meredith Wilson's story and music is such a beautiful and moving celebration of the power of love, music, hope, community, and a shared goal. And this production brings out every wonderful thing in his work. In a word, this Music Man is scrumptious.

You all know the story - a con man comes to a small Iowa town to sell them band instruments, uniforms, and a false promise of musical instruction, bringing music and new life to the stolid town, all the while planning to skip town after he collects the money, until he unexpectedly "gets his foot caught in the door on the way out," realizing that he needs these people to believe in him as much as they need someone and something to believe in. Professor Harold Hill is an expert salesman with a knack for knowing exactly what people need to hear and telling it to them in the most appealing way. He wins the town over person by person, giving the children something to focus on and look forward to, convincing the bickering school board to become a barbershop quartet, prompting the busybody ladies to form a dancing society.  But music teacher and librarian Marian, a proud, guarded, and bookish "old maid" with high standards is not so easily won over. She knows the truth about Professor Hill, but when she sees her troubled and withdrawn little brother begin to blossom under his friendship, and the town come together as one, she sees that "the truth" about Professor Hill doesn't really matter. What matters is the joy that he's brought to the town, and even if he does skip town, he will leave them better than he found them.

I love our local actors so much that I'm always a little disappointed when cast lists are released with unfamiliar names at the top. But I need to learn to trust the Guthrie casting department, because they always find just the right person for each role. For as soon as these newcomers stepped on stage, they made me fall in love with them against my will! And truly, this 40+ person cast is a beautiful mixture of about half Guthrie veterans, a half dozen newcomers from the national scene, and even more Guthrie newcomers from within our own talent base, including many of our most above average children.

Moments after stepping onstage, or rather, revealing his identity after the opening train scene (more about that later), Danny Binstock had me under his spell as much as Harold Hill has the River City-zens under his. Smooth-talking, -moving, and
-singing, with boundless charm, an ever-present spring in his step, and a knowing roguish smirk on his face (and looking a bit like Joseph Gordon-Levitt), he simply is Professor Hill. Stacie Bono is everything you'd want in Marian the librarian, sensible, smart, and proud, slowly letting her hair down (figuratively and literally) as she lets this man into her life. And her golden soprano voice will give you chills on such songs as "My White Knight" and "Till There Was You." Danny and Stacie are a charming pair with oodles of chemistry and lovely harmonies.

I cannot possibly mention all of the wonderfulness in the ensemble, but I'll just point out a few, starting with the littlest (the child roles are shared between two actors). Soren Thayne Miller is sweet and adorable as Winthrop; the moment when he begins to talk excitedly about his scrumptious solid gold coronet always gets me. Rising star Natalie Tran is equally adorable as the spunky Amaryllith. Moving on to the grown-ups, Richard Ruiz has played the role of the Professor's buddy Marcellus four times around the country, and it's easy to see why - he's a dead ringer for Buddy Hackett from the movie, and his big song "Shipoopi" is just as fun. Peter Thomson is hilarious as the bumbling mayor (in Peter's words, he thinks himself the Teddy Roosevelt of River City, but possesses the intellect of Spiro Agnew). Barbara Marineau is a hoot as his wife Eulalie, performing in ever more ridiculous get-ups with her dancing ladies (all of whom are wonderful). James Ramlet, Joel Liestman (filling in for an injured T. Mychael Rambo), Robert O. Berdahl, and Robert DuSold comprise a barbershop quartet sent from heaven. Margaret Daly is a warm and funny presence as Mrs. Paroo, and Brandon Timmons is a wonderfully high-stepping, baton-twirling, band-leading drum major.

The talent in the large ensemble bursts off the stage, and director John Miller-Stephany does a wonderful job keeping everything organized and moving, and bringing out the huge heart in this piece. The busy and spectacular group numbers are nicely balanced with quieter character moments. Speaking of spectacular group numbers, Joe Chvala's choreography is, as always, an absolute delight and so much fun to watch, even though there's so much going on onstage it's impossible to take it all in in one sitting (lucky for me I'm going back to see the show again with my family in August). The opening number is particularly ingenious, as the salesmen rap about the art of selling ("you've gotta know the territory!") while moving as one, so realistically depicting the motion of a train that I almost got nauseous just watching them! Another highlight is "Marian the Librarian," depicting probably the most fun that's ever been had in a library.

A musical about a band has to have a great band, and do they! Music director Andrew Cooke is the first person onstage, taking his place in a mini-pit at the front of the stage, only his shoulders and head visible as he leads the cast and backstage band performing this beautiful, rousing, clever, lovely score with too many great songs to mention. And when the River City band marches on stage at the climax of the play, it's truly thrilling, and so moving as these loving parents think the warbled sounds of these unrehearsed children is as sweet as a symphony. That's love.

The inspiration for Todd Rosenthal's set design is, appropriately, Iowa artist Grant Wood. Yes, there is an American Gothic moment, but the larger inspiration is the painting Young Corn. Not only are the backdrop and scrim painted in the style of Young Corn, but the buildings are as well. Director John Miller-Stephany said in a post-show discussion that this emphasizes the importance of the rural farming community in this small Iowa town. In addition to the massive buildings (some of which might look familiar to those who saw My Fair Lady last summer), there is large square in the stage floor that lowers to the bowels of the Guthrie* to change the set pieces from the train, to the town square statue, to the Paroo living room, to the gymnasium, to the hotel, to the library, and finally to the footbridge. Mathew J. LeFebvre's costumes are a feast for the eyes, from flouncy dresses to well-tailored suits to brightly colored band uniforms.

It's obvious that Meredith Wilson wrote The Music Man as a loving homage to his home city of Mason City, Iowa, using people and places he knew as inspiration for the piece. And the Guthrie's production continues in that spirit. As much as we Minnesotans like to make fun of Iowa, we're really not that different, and the values of home, community, pride, and family ring true. If you're a person who loves musicals, you won't want to miss this Music Man that will remind you of why you love musicals. That is, familiar and beloved songs, a huge and hugely talented cast of familiar faces and new, fantastic set and costumes that bring you right into that world, humor, and most important, a meaningful and poignant story told with much heart. The Music Man continues through August 23, but get your tickets soon before they sell out.


*The Guthrie offers backstage tours, in which you can visit the bowels of the Guthrie and see how the stage mechanics work, as well as tour the rehearsal spaces and costume and set shops.