"Once" at the State Theatre 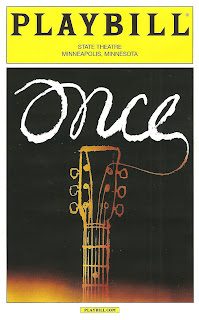 There's no big opening number, no splashy dance with dozens of chorus girls and boys, no pit orchestra, no large moving set pieces, no colorful glamorous costumes. Once is not your typical musical. In fact, according to The Cherry and Spoon Music-Theater Spectrum1 it's not a musical at all, but rather a play with music. Yet this atypical not-really-a-musical musical won eight Tony Awards in 2012. Why is that? Why was this quiet and quirky musical based on a little Irish movie awarded Broadway's biggest prize? Perhaps because it is different from other musicals. Perhaps the voters awarded the creative and organic way music is used to tell this beautifully simple and non-traditional love story. Once is a new kind of music-theater, and proves that musicals don't always have to be big and loud to have a profound effect on the audience. Once is quietly, beautifully stirring.

This is the second time that the First National Tour of Once has stopped in Minneapolis, with largely the same cast, although this time it's making its home in the slightly more intimate State Theater2. The tagline for this tour is "once is not enough," but for me, thrice is not enough as I would gladly go see it again every night of its brief one-week Minneapolis stay! Perhaps I'm biased - Once is one of my favorite movies and my favorite movie soundtrack, and it introduced me to my favorite musician Glen Hansard. But even without that prior attachment, it's easy to see that Once is something truly special. The music is raw and passionate, performed by a cast of 13 quadruple threats - they act, sing, dance (or at least move in a choreographed way), AND play an instrument. This folk-rock score written by the stars of the movie, Glen Hansard and Marketa Irglova, is not the kind of music you usually hear coming from the Broadway stage; it's quieter, less polished, and more real3. The story is simple and quiet - boy meets girl, boy fixes girl's Hoover, girl encourages boy to record his songs and follow his dreams, boy and girl go on with their separate lives, better for having met one another. John Carney's original story was adapted for the stage by the beautifully twisted mind of playwright Enda Walsh, retaining that unique Irish spirit4. The result as a whole is lovely, poignant, moving, and grand.

Since this is largely the same cast as last year, I'll repeat what I said then: As the guy, Stuart Ward has big shoes to fill - both those of Glen Hansard and Steve Kazee, who won a Tony for the role. And fill them he does, although in a different style than either of these predecessors. He possesses a gorgeous voice that's more musical theater than folk-rock, a moody intensity, and great stage charisma. The character of the girl changed so much from movie to stage that all thoughts of Marketa Irglova are gone, but Cristin Milioti (aka the surprisingly short-lived "Mother") left a great impression. Dani de Waal fills those shoes nicely in the quite tricky role of the girl, charming and sweet but not too perky. And when Stuart and Dani sing together, as on the Oscar-winning song "Falling Slowly," it's wondrous. The two are well supported and enhanced by ten wonderful actor/singer/musicians (and one adorable little girl). Standouts include Evan Harrington as the good-natured but tough music store owner, Scott Waara as the guy's sweet Da (with a really lovely pre-show song), and Matt DeAngelis, providing comic relief and powerful percussion as Svec (you know you're a true musical theater geek when you recognize touring cast members, as I did Matt; I clearly remember him as Woof in another musical obsession of mine, Hair, and in American Idiot).

The set is a pub that never changes, with tables and chairs brought out to represent different settings. Through it all, most of the cast remains on stage, watching from the sidelines. Dingy mirrors surround the stage and offer other angles of the action. The movement and choreography is so beautiful, subtle, and organic. There are no typical "dance numbers," just characters moving organically as the music moves them. Even the scene changes are beautifully and elegantly carried out, as not a moment is wasted.

The show begins before the show begins; the audience is allowed onstage to visit the pub and drink an overpriced beer through a straw. But it's worth it because the cast of musicians soon comes onstage for a traditional Irish session which you're able to witness up close and personal. After the audience is escorted off the stage, the session continues as the cast trades songs, until the musical baton is passed to the guy in the scarf, he belts out an impassioned "Leave," and the house lights go down. Just like that, reality fades and the world of the play takes over, and is so engrossing that it's like a dream. One that I hated to leave.

Unlike what Hollywood and Broadway usually tell us, not everyone gets a happily ever after kind of love, and maybe that's not even the ideal kind of love to strive for. If we're lucky, we get an hour, or a day, or a week-long encounter with someone who changes our life and pushes us forward when we've become "stopped." Maybe that's what life is, a series of moments, encounters, relationships, that might not last a lifetime although their effects do. That's what this story is about, and that's what these two people do for each other. It's a perfect love story, even though it may not end in the way that we're taught to expect. And it's also a love story about Ireland and its rich and unique culture, that the girl describes as "speaking and singing of what it is to be human." She tells the guy that he has "heart and soul," and this unique music-theater creation has heart and soul in spades, and speaks and sings of what it is to be human, with all the heartbreak, joy, disappointment, passion, connection, difficulties, and wonder it entails.

Once continues at the State Theatre in downtown Minneapolis through this weekend only. Whether it's once, twice, thrice, or more, it's a grand experience that's not to be missed.


1. The Cherry and Spoon Music-Theater Spectrum (TM pending): in a musical, characters sing in character, expressing their emotions and moving the plot forward. In a play with music, the music takes place in context, with characters singing in a way that would make sense in real life, and don't sing as the character. If you take the music out of a play with music, it still makes sense, although some of the impact is lost. If you take the music out of a musical, the story no longer makes sense.
2. Find out more about the State, Orpheum, and other local theaters in my "Review of Venues."
3. If you like the music of Once, check out Glen and Mar's follow-up album Strict Joy under their band name The Swell Season, or their solo albums Rhythm and Repose and Muna (among others), or the upcoming album commemorating the 25th anniversary of Glen's band The Frames.
4. For another taste of that unique Irish spirit, go see Guthrie departing Artistic Director Joe Dowling's loving ode to his homeland, the beautifully tragic Juno and the Paycock.