"You Can't Take It With You" at the Jungle Theater 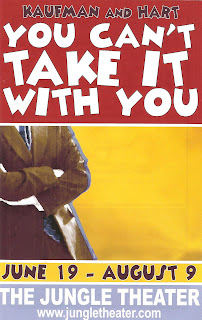 About a year and a half ago, I cut down the hours on my day job so that I would have more time to do what I love - seeing and writing about theater. Which essentially means I took a pay cut in order to have more time to enjoy my life. This means that my bank account is a little smaller, but as the man said, you can't take it with you! It's a motto I live by, but had yet to see the play by that name until last night. I was pleased to discover that it celebrates this very spirit - doing what you love, surrounded by people you love (no matter how crazy they might be), and not sacrificing these things for a paycheck. Granted, not everyone is in a position to reduce their paycheck to spend time blogging, or dancing, or making fireworks, but it's a good thing to assess how you're spending your time (more precious and rare than money) every once in a while. Jungle Theater's production of You Can't Take It With You is funny, quirky, heart-warming, and with a cast so delicious it'll make you drool.

It's 1937 New York, and the extended Sycamore family is about as eccentric as they come. Grandpa quit his job 35 years ago because he didn't enjoy it, and spends his time raising snakes and attending commencements. Daughter Penny and her husband Paul keep busy writing plays and making fireworks, respectively, while their daughter Essie, who lives in the house with xylophone-playing husband Ed, studies dance and makes candy. Various other oddball friends and employees fill the house, with daughter Alice as the only seemingly "normal" one. She works in an office on Wall Street, and falls in love with the boss' son. As you can imagine, when Alice brings Mr. Kirby and his conservative wealthy parents home to meet the family, much hilarity ensues. Will these two very different families ever make peace so that these two crazy kids can get hitched?


This is a huge and star-studded cast, with many favorites from the Jungle and other local stages, including three real-life married couples (although only one of them actually plays a married couple). And there's not a weak link among them, including the two kittens! Each actor is so committed to the role and bringing out each character's delightful and specific quirks, while still making them seem like real people. In fact I don't know where to begin in singling out individual performances, for fear of leaving someone out! But I'll give it a go:

There's Angela Timberman as the loveable flake of a mother (I don't think it's possible for a human to upstage her, but a kitten can, especially when it starts playing with her earring!); John Middleton as her fireworks-obsessed husband; Cathleen and Nathaniel Fuller as the stiff and conservative Kirbys, both of whom have a little more life inside them than initially seen; Anna Sundberg as the sweet and relatively normal Alice; Hugh Kennedy, as charming as ever as her Mr. Kirby; Elisa Pluhar and Peter Lincoln Rusk as a couple of loyal employees that fit right in with this odd family; Charity Jones as a boozy actress who spends most of her time onstage collapsed in a heap; the delightful Julia Valen as Essie, constantly dancing and fluttering in her ballet slippers, frequently getting up on those toes; sharing a cute and easy chemistry with Max Wojtanowicz as her husband who accidentally distributes communist messages; Jay Albright, goofy as ever as Paul's fireworks buddy; Allen Hamilton as the frighteningly intense Russian dance teacher; Wendy Lehr as the Grand Duchess who makes blintzes, a third-act appearance that's worth the wait; Gabriel Murphy as the shocked IRS agent who enters the home and doesn't know what he's getting into; and last but not least, Raye Birk who, like Grandpa, is the heart and center of the show. Phew! Trust me, they're all fantastic and play together so well under Gary Gisselman's direction that every performance is a joy to watch. In fact there's often so much goodness going on at once on different parts of the stage that it's impossible to take it all in! 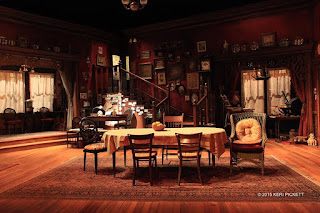 All of this craziness takes place in the Sycamore home, beautifully designed by Tom Butsch to use every inch of the Jungle's small stage. There's a foyer, office area, alcove for Ed's xylophone and printing press, stairway, dining table, and several doorways with set decoration continuing outside the doors. The walls are covered with framed photos and artwork, and every corner is crammed with books and tchotchkes. Amelia Cheever's '30s period costumes are beautiful (including several pairs of shoes I would like to own) and perfectly suited to each character. The lighting by Don Darnutzer and sound by Montana Johnson complete this specifically defined world (including several fireworks tricks on and off stage), with period music playing during intermissions and a post-curtain call song that perfectly sums up the evening: the best things in life are free!

What else can I say about You Can't Take It With You than it's an absolute delight and utterly joyful. Head to the Jungle between now and through August 9 for a pick-me-up and to revel in the good things in life.