"The Illusion" by Theatre Pro Rata at Park Square Theatre 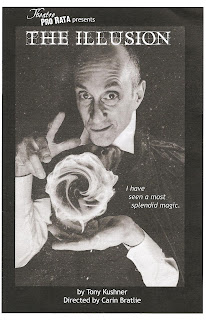 In Tony Kushner's The Illusion, an adaptation of a 17th Century French play, you're never quite sure if what you're watching is reality or illusion. But this is the theater, so it's all illusion anyway, isn't it? The Illusion plays with ideas of reality, theatricality, illusion, truth, perception, and imagination. Theatre Pro Rata's production, now playing at Park Square Theatre's Boss Stage as part of their "Theatres in Residence" series*, playfully dives into these themes and delivers a funny, entertaining, and engaging play.

In the opening scene of the play, we meet a man who has come to a secret cave to ask a magician about the son he kicked out years ago. For a fee, the magician obliges and shows him the life of his son acted out before him behind a line he cannot cross. Three different scenarios are presented, related but with slightly different circumstances and ever-changing names for the people involved. In the first scene we see the son in pure, young, innocent love; in the second scene he's involved in a love that makes him do desperate and perhaps unwise things; and finally, we see the son with a love that's become tired and jaded. Throughout it all, the man, the magician, and his assistant watch the stories play out. It's unclear, to them and to us, how these three are stories related and which of them is true, if any. After all, you can never really trust a magician to tell you the truth. And what would the man do with the truth anyway? Perhaps he wants to imagine his wayward son as something other than what he has actually become. 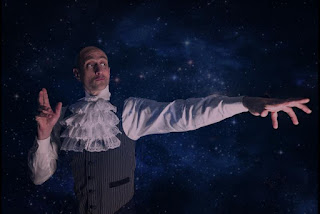 The fantastical nature of the magician's illusions are brought to life with colorful, almost cartoony, sets and costumes (which makes even more sense when the "truth" is revealed, which I won't spoil for you). Simple two-dimensional set pieces are carried on and off the bare stage by the characters in each scene, who are dressed in the flouncy skirts or knee pants we associate with 17th Century French society. Set against a backdrop of a curtain in a frame, the effect is very much that we're watching a scene play out for the viewers, who sit on one side at the back of the stage and watch the events unfold with varying reactions (set design by Sadie Ward and costume design by Mandi Johnson).

As the play went on, I became more and more convinced of the excellent casting of the actors who play father and son and who really look the part. Paul de Cordova and Michael Fell share the traits of thick dark hair, a thin face, and a lanky build. Or perhaps it's just their acting that makes me think they look alike, Paul as the father, a little older, wiser, and regretful of past mistakes, Michael as the son, full of energy and acting against his father's rejection. The two never meet (or do they?), but the two performances anchor the two sides of the story and provide a connection. As the magician, Charles Hubbell is appropriately mysterious and a bit creepy, and Tim Uren is amusing as his silent assistant who later takes part in the action. All of the actors in the revolving scenarios, including Michael, bring the stories to heightened life, and play slightly different versions of the same character in each. Abby DeSanto is the beautiful and desired lover with a will of her own, Kelsey Cramer is the mischievous maid whom you almost want to win out over her mistress, Ben Tallen is the pompous rival, and Bryan Grosso is the delightfully over-the-top comic foil.

I saw my first Theatre Pro Rata show just over a year ago, and I've been impressed by everything I've seen since then. It's all been pretty intense (the real-life hanging of a circus elephant, an adaptation of a frightening dystopian novel, and a convicted child molester trying to reintegrate into society), which I appreciate, but it's fun to see a lighter, more playful side to the company in The Illusion, while still being thought-provoking and captivating. The Illusion continues through June 28.


*Park Square Theatre's "Theatres in Residence" series also includes Sandbox Theatre, whose War with the Newts was recently seen on the Boss Stage, and Girl Friday Productions, debuting on the Boss Stage with The Matchmaker next month.