"Damn Yankees" at the Ordway Center 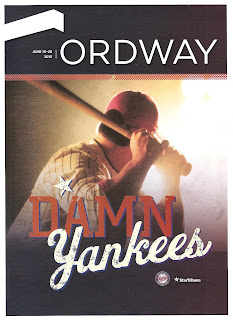 In the fall of 1987, I was in my second year of junior high, a time that's not kind to a quiet, smart girl with glasses, braces, and frizzy hair. But something happened that made all of the bad stuff go away. The Minnesota Twins won the World Series. My parents had been taking me to Twins games since I was a wee one. I even have vague memories of the old Met Stadium, and clear memories of my first time in the then-un-air-conditioned Hubert H. Humphrey Metrodome ("If they don't put air conditioning in here I'm never coming back," said the stubborn young redheaded girl). I loved my Twins, but I didn't realize just how wondrous and exhilarating baseball could be until that late October night in 1987 when Gary Gaetti threw across the diamond to Kent Hrbek to record the final out of Game 7. There's nothing quite like that feeling when the team that you've loved, supported, and cheered for your whole life comes out on top, and the world knows what you've always known, that the Twins are the best team in the world. Little did I know that that magic event would occur again just four years later when the 1991 Twins brought home another championship in a breathtaking, nail-biting, riveting, ten-inning Game 7. The only two times in my lifetime that the Twins had made it to the playoffs, they won the World Series. So imagine my surprise when the baseball gods turned their faces away from my beloved Twins. Even though we've seen a few playoff stints in the early 2000s, it's been more than 23 long years since we've had a World Championship baseball team in Minnesota. So would I sell my soul to the devil to relive that '87/'91 magic in 2015? I don't know - make me an offer.

Given my love of baseball and musical theater, one would think that the 1956 Tony-winning musical Damn Yankees would be on my favorites list. This story about a fan of the Washington Senators (who became the Twins when the franchise moved to Minnesota in 1961) who sells his soul to the devil to become a home run hitter who leads his team to the championship is right up my alley. But despite having uttered the phrase "Damn Yankees!" many a time in my lifetime of cheering on the Twins, I had never seen the show before last night. I'm happy to report that the Ordway's production of Damn Yankees is exceedingly fun and completely satisfying for anyone who loves baseball and/or musicals, capturing the pure love of baseball in the fantastical story, catchy score, and fabulous performances by both national and local talent. It's truly a summertime treat.

For those of you unfamiliar with the story, here's what you need to know. Joe Boyd is an avid fan of the Washington Senators, and disappears for "Six Months Out of Every Year" as he lives and dies by his team. His wife Meg puts up with it because she loves him. The Devil shows up in the form of a Mr. Applegate (in this case, the devil wears black with red pinstripes) and offers to turn Joe into a home run hitter for the Senators. Joe agrees, leaving his wife behind, but only temporarily until he can beat the Yankees! Despite his success on the field, Joe misses his wife and his old life, so Mr. Applegate brings in Lola to seduce him. Choices are made, scandals are uncovered, lives are changed, and games are won and lost. But will the devil win out? (What do you think, it's a musical!)

Written in the '60s, the show is a bit dated, with husbands sitting in armchairs watching baseball while their wives bemoan the fact that they're not paying attention to them and the meals that they cook. But at least there are a few women baseball fans. And in this production, the hero Joe is African American, something that's barely even noteworthy in a time when the baseball field is one of the most diverse places in the country, but surely was not what the creators envisioned just a few years after Jackie Robinson broke the baseball color barrier. The interracial relationships also (hopefully) don't raise any eyebrows today, but the diversity serves to make the show feel a bit more modern and relevant.

The Ordway has brought in national talent to play most of the leads, and as much as I love my local favorites, it's hard to argue with success - the show is really well cast. Lawrence Clayton and Ann Morrison have a sweet chemistry as the long-married couple. Thay Floyd is a charmer as young Joe, with a voice that will give you chills! With just a few Broadway credits, he seems like a star in the making. A star fully made is Tari Kelly* as Lola. Sexy and funny and strong and sweet, I pretty much want to be her. After all, "Whatever Lola Wants, Lola Gets!" Monte Riegel Wheeler is appropriately creepy and devilish as Mr. Applegate, and performs some crowd-pleasing light magic. Filling out the supporting characters and ensemble are too many talented local singer/actor/dancers to name, including Kersten Rodau as a plucky reporter, Dieter Bierbrauer, Reid Harmsen, and Randy Schmeling as ballplayers, and Regina Marie Williams as Meg's baseball-loving friend. Honorable mention goes to the adorable young Mario Esteb, the only kid on stage who holds his own among these professionals and represents every little girl and boy who grew up loving baseball.

The Ordway is all decked out in the baseball theme, from the ushers in baseball caps who look more like Target Field ushers than theater ushers, to the familiar voices from Target Field making announcements, to a display of memorabilia from the Washington Senators in the lobby. The relatively simple set (by J Branson) is dominated by the fabulous onstage orchestra directed by Jeff Rizzo, with various set pieces brought out in front of them, including lockers and showers for the clubhouse scenes. The setting is further delineated by pop art-like illustrations projected on a screen behind the band, which also displays vintage baseball footage before the show and during intermission. The '50s period costumes (by Lynda L. Salsbury) are luscious, from the authentic-looking baseball uniforms, to the women's full '50s skirts, to Lola's sultry black and red dresses (always with red shoes!). A couple of fun dance numbers are nicely choreographed (by co-director/choreographers James Rocco and Sharon Halley) in a jazzy, swingy, Fosse kind of style, smartly performed by the cast.

James Rocco worked with his team to make the show "faster and funnier" (the words of book writer and original director George Abbott), and they succeeded. This is not one of those musicals that, even though you love it, plods on just a little too long. It's one of those musicals that ends and you think "is it over already?" It is fast (just over 2 hours including intermission) and it is funny. The run is fast too - the show closes on June 28 so make plans fast to catch this delicious summer treat. With a post-curtain call audience singalong to "You Gotta Have Heart," it'll send you out to the streets happy and ready to cheer on the home team! (Discount tickets available on Goldstar.)