"Putting It Together" and "La Rondine" by Skylark Opera at E.M. Pearson Theatre 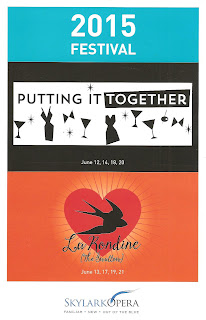 One of the theatrical highlights of the summer, Skylark Opera's Annual Summer Festival, is upon us! As usual, the two shows playing in repertoire include one that's more of a traditional opera (but always in English) and one that skews a bit more towards musical theater: Puccini's La Rondine and the Sondheim musical revue Putting It Together (put together by Sondheim himself). As someone who loves musical theater but doesn't venture into the world of opera very often, Skylark's Summer Festival offers a fun, easy, accessible way to enjoy to dip my toes into the opera scene and indulge my love of musical theater. Both shows are highly entertaining with excellent casts and orchestras. But the runs are short with just four performances of each show. So read on, take your pick, and get your tickets before this all-too-brief Summer Festival is gone like the all-too-brief Minnesota summer!

Putting It Together
A terrific five-person cast, a fantastic eight-piece orchestra, and over 30 of Sondheim's greatest songs. What could be better?! Written in the early '90s, Sondheim pulled together songs from over a dozen of his musicals (including some that were cut from the original shows) and tied them together loosely with the story of two couples, one that's been together a long time and one that's just starting out. This allowed him to use many great relationship songs from the likes of Merrily We Roll Along, A Little Night Music, Company (my personal favorite, and perhaps Sondheim's as well because he included five songs in this revue), Follies, and the movie Dick Tracy. (Does anyone remember that Sondheim wrote five original songs for the 1990 movie? Me neither, but he included four of those five songs in this revue, maybe because it was so recent.) There's not much of a story here, so much as a study of relationships, and all of these diverse songs work surprisingly well to explore different facets of these relationships and give us a picture of who these people are (although some work better than others - the wolf's song from Into the Woods doesn't really fit in any context outside of the woods, although it is a commentary on a certain kind of relationship).

On a set that looks like a posh and sparse NYC apartment with a terrace, the long-married couple, the new couple, and their butler/commentator have a dinner party, dressed of course in tuxes and gowns. Each song is like a little story in itself, exploring a different facet of the relationships. There's little to no dialogue tying them together, although the commentator does declare the theme of certain segments, like "seduction," "desperation," and "competition." The long-married couple is full of regret ("The Road You Didn't Take" from Follies) and desperation ("The Ladies Who Lunch" from Company), the new couple full of hope ("Marry Me a Little" from Company) and sweetness ("Unworthy of Your Love" from Assassins). The men talk about women ("Have I Got a Girl for You" from Company, "Pretty Women" from Sweeney Todd) and the women talk about men ("Every Day a Little Death" from A Little Night Music). And then there are some silly songs that don't have much to do with anything but are fun nonetheless ("More" from Dick Tracy, "Buddy's Blues" from Follies).

The original 1993 Off-Broadway production starred Julie Andrews. Despite having Julie Andrews' cute pixie cut, Emily Gunyou Halaas is not known in this town as a singer, but rather as a talented actor in straight plays. I suspect that will change after this performance, in which she proves that singing is another tool in her acting toolbox that is readily available to her. I've always thought she has a melodious speaking voice, and she sings like she talks. Not only is her voice lovely, rich, and pleasant to listen to, but she brings all of her acting talent to the song, making us feel every emotion in Sondheim's intricate lyrics, which is perhaps the most important part of musical theater. She tackles some of the most difficult songs in this show ("Could I Leave You" from Follies, "Getting Married Today" and "The Ladies Who Lunch" from Company) and comes out on top every time.

The rest of the cast more than holds their own, and they all sound beautiful individually and in various combinations of duets, trios, and group numbers. Commentator Paul Coate nicely delivers "Invocations and Instructions to the Audience" from Frogs (which sounds a lot like my recent audience DOs and DON'Ts post) and the super fast and funny "Buddy's Blues" from Follies. As the husband, Jeffrey Madison hits some poignant and creepy notes, respectively, in "The Road You Didn't Take" from Follies and "Hello, Little Girl" from Sweeney Todd. The new couple Vicki Fingalson and Gabriel Preisser share a lovely duet in "Unworthy of Your Love" from Assassins, as well as some nice solo moments including Vicki's seductive "Sooner or Later" from Dick Tracy and Gabriel's triumphant "Marry Me a Little" from Company. And of course, no Sondheim revue about relationships is complete without one of his best songs on the subject, "Being Alive" from Company, a song I've heard many times but never quite like this, as the entire company joins in on a beautiful five-part version of the song.

With direction by Robert Neu and music direction by Andrew Fleser leading this terrific cast and orchestra through some of Sondheim's best work, put together by the man himself, Putting It Together is a must-see for fans of Sondheim, and music-theater in general.

La Rondine
Perhaps most famous for La Boheme (this inspiration for my favorite musical RENT), Puccini called La Rondine "perhaps, my best music" (per a note from director Ben Krywosz of Nautilus Music-Theater). Written in the early Twentieth Century, Skylark sets the story in 1920s Paris. The three acts depict different phases in the life of our heroine, Magda. The first act takes place in her posh Paris apartment (reusing some of the set pieces from Putting It Together). At a dinner party with friends, she reminisces about an exciting and romantic encounter with a man long ago. But now she has settled for a comfortable but loveless life with her patron (or sugar daddy, to put it in modern terms) Rambaldo. The second act takes place in a crowded dance hall, where Magda has decided to go in disguise for a bit of excitement. There admidst the dancing and revelry she meets the charming young Ruggero and they fall instantly in love (because such things happen in opera). She decides to leave Rombaldo and run away with Ruggero to the country, where we see them living blissfully in act three. But alas, their love cannot last because... something about Magda's shameful past? She doesn't think his mother would approve? They ran out of money? It doesn't quite ring true that in 1920s Paris these two crazy kids would conform to social standards and not be able to make it work. But tragedy is as sure to happen in opera as sudden all-consuming love, and the story ends on a tragically beautiful note.

Cecilia Violetta Lopez is a star as Magda. Not only does she have a stunning voice, but she makes you feel Magda's every emotion, from dissatisfaction to hope to resignation. As Ruggero, Won Whi Choi is her match. They both have huge voices, and when they sing in harmony it's really quite something. The large supporting cast is great and creates some stirring sounds when their voices join together on this gorgeous score. Lindsay Russell provides some comic relief as Magda's spunky and ambitious maid Lisette, and Norman Shankle is lovely and charming as Madga's poet friend and Lisette's secret lover. Paul Hindemith does a good job with Rambaldo, despite the distracting and borderline offensive old man make-up (is "oldface"a thing?).

Skylark's Artistic Director Steven Stucki conducts the 20+ piece orchestra through this lovely and luscious score. Lynn Farrington's costumes recreate that '20s flapper look for both the high society crowd and the dance hall revelers with dropped waist dresses, smart hats, headbands, and jewels. Kit Meyer has designed a flexible set of faux-marble columns and pieces that can be rearranged for the necessary sets in both shows.

Both shows in Skylark Opera's Summer Festival are perfectly lovely and a wonderful summer treat. Head down to St. Paul's Concordia University campus in the next week to see one or both of these very different but equally satisfying shows.