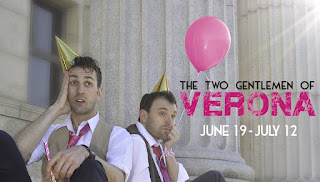 The best thing about living in Minnesota is: a) theater, and b) lakes. Combine those two, and you have about as perfect of a Minnesota experience as you can have. Classical Actors Ensemble is presenting Shakespeare's comedy Two Gentlemen of Verona at Lake of the Isles (and other select locations) this summer. I saw the matinee yesterday, and it was a lovely way to spend a picture perfect Minnesota summer afternoon. The show is utterly charming, and something about doing it outdoors in a public space makes Shakespeare seem more immediate, natural, and real, like this is a story that's happening in our world here and now. I sometimes have a hard time getting into Shakespeare, but this company makes it extremely accessible and so easy to become engaged in the stories, characters, and Shakespeare's beautiful words, which sound modern and fresh in this context. Their mission is: "Classical Actors Ensemble is dedicated to engaging audiences by capturing the spirit in which plays of the English Renaissance were originally performed - with immediacy, passion, and as popular entertainment." Mission accomplished.

Walking down the hill by the lake towards the stage area feels like walking into the Renaissance Festival. A dozen or so young people are cavorting in Renn Fest peasant garb, talking, singing, playing instruments. The pre-show show is a going away party for Valentine, who's leaving Verona to find his fortune in Milan (which they adorably pronounce MILL-un). It feels like a modern day outdoor party among friends, except for the charming dances to Beetles and other pop songs played in Renn Fest style. The cast is comfortably chatting with each other and the audience, and as showtime approaches, the language suddenly switches to Shakespeare and the play begins, but that modern immediate feeling is never lost. The show is playful, loose, and fun, full of youthful exuberance, but not at the expense of the material. On the contrary; it feels like this is how Shakespeare is meant to be done. It's not supposed to be stiff and formal, but, like their mission says, "with immediacy, passion, and as popular entertainment."

Verona is portrayed as a provincial little town (Renaissance Festival), and Milan the slick big city (as the wardrobe changes to a sharp black, gold, and pink, with a '20s flair). Valentine leaves fair Verona and his best friend Proteus behind, and finds love in Milan in the form of Silvia, daughter of the Duke. Proteus soon follows his friend to Milan, leaving behind his own beloved, Julia, and being a fickle man soon falls in love with Silvia too. But Silvia's father already has a husband picked out for her, and banishes Valentine from Milan, whereupon he falls in with a band of outlaws. Proteus' attempts to woo Silvia come to naught, and she goes in search of her love Valentine. Proteus follows with his page (Julia in disguise), finds Silvia and Valentine, who is none to happy with his friend's behavior. But this is a Shakespearean comedy, so the appropriate couples are reunited, and all's well that ends well!

Everyone in the cast is great and so much fun to watch, and these well trained young actors project beautifully over the noises of traffic, animals, and people to the small crowd gathered on the hill. As the titular gentlemen, Daniel Joeck (Valentine) and Joseph Papke (Proteus) portray a great bromance and are charming in their individual stories as well. Marika Proctor makes the bespectacled Julia appealing and empathetic, while Megan Volkman-Wilson is posh and sophisticated, but no less true in her love. As usual, the servants get the funniest, smartest lines, and Marci Lucht (Speed) and Michael Ooms (Lance) deliver them with gusto. Marci is a wisecracking tomboy, and Michael is an endearing goofball (not unlike his father). As Silvia's foppish suitor Turio, Timothy Daly is over-the-top (in a good way). But perhaps the biggest scene-stealer in this cast is the dog Karma, playing the role of Lance's dog Crab. Following along where he's led, doing as he's told, playful and adoring of his master (I'm loving the recent trend of live animals in theater!).

Director Hannah Steblay nicely reigns in the chaos of people, animals, music, and the natural elements to create a focused and engaging story. And just because it's outdoors doesn't mean they skimp on costumes and set. Several large wooden platforms are moved around, flipped over, and stood on end to create the different settings. The provincial Renn Fest costumes give way to the sleek city wardrobe of smart suits, fedoras, and flapper dresses. (Scenic design by Shannon Morgan and costume design by Sarah Sakry.)

I love the use of music throughout the play in appropriate places, as the band consisting of various combinations of horn, accordion, guitar, and voice play Renaissance-style pop songs. Perhaps the most appropriate is the curtain call song "Why Do Fools Fall In Love?" which could be a theme song for just about all of Shakespeare's comedies. In this play as in others, it's a mystery why these fools fall in love, and then fall out of love, and then fall back in love again. But we love to watch them! These two gents are a particular joy to watch - a charming and energetic production in the unparalleled setting of the great Minnesota outdoors. Be sure to put this one on your Minnesota summer to do list! They perform Fridays at 7 and Saturdays and Sundays at 2 through July 12, mostly at Lake of the Isles but with a few other Twin Cities locations sprinkled in (see their website for details).