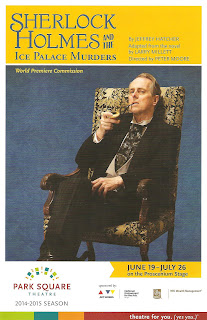 The old adage "the show must go on" was tested last night. On the day that Park Square Theatre's world premiere play Sherlock Holmes and the Ice Palace Murders was scheduled to open, Steve Hendrickson, aka Sherlock himself, underwent surgery for an aneurysm. The good news is he's going to be fine and will hopefully return to the show soon, but what to do about opening night? Director Peter Moore to the rescue! With one emergency rehearsal and script in hand, he took the stage to embody one of the most iconic characters in literature and film. And it was a success. Even though he often looked at the script (not even a show biz vet like Peter Moore can learn an entire play in a few hours), he never broke character and was able to convey that distinct Sherlock Holmes-ness. It probably helps that he's surrounded by a great cast playing multiple characters, acting a script written by one of Minnesota's best playwrights Jeffrey Hatcher, based on a novel by Larry Millett, based on the characters created by Sir Arthur Conan Doyle. That's a recipe for success that's able to withstand last-minute challenges.

In Larry Millett's story, Sherlock Holmes and his trusty partner Watson are on a three-month tour of the US in 1896. They're about to depart Chicago to head back to London when they read about the strange disappearance of a wealthy groom in St. Paul. The mystery is too much for Sherlock to resist, so they take a detour to St. Paul to see what they can find. What they find is a daughter and son of wealthy businessmen with a stake in the Winter Carnival, about to be married in the Ice Palace until the groom disappears and the bride suspiciously returns her wedding dress. Holmes and Watson team up with a local barkeep/ex-cop named Shadwell Rafferty, along with journalist Miss Pyle who wrote the article enticing them to come to St. Paul. They discover a horrific scandal in the groom's past, and secrets that the bride is keeping as well. Suspects abound, from family members to Ice Palace workers to the town burglar. It's great fun to watch these two sleuths uncover the truth, especially in the second act as the clues start falling into place with greater speed.

Steve Hendrickson has played Sherlock multiple times on Park Square's stage (most recently in The Adventure of the Suicide Club two years ago), so those of you who see the show after his recovery are in for a treat! But even now, Peter Moore does a fine job filling in for him, and Bob Davis is so comfortable in the skin of Dr. Watson (a role he has also played multiple times) that it seems like a quite natural pairing. As their new partner/friend/adversary Rafferty, E.J. Subkoviak is a delight with his Irish-by-way-of-Boston accent and roguish charm. Tamara Clark and Taylor Harvey do as much as they can with the roles of the plucky reporter and the bride with secrets (the world of Sherlock Holmes has always been a boy's club, but it's too bad a modern update doesn't have better roles for women). The rest of the cast ably plays multiple roles, including Neal Hazard as the affable driver and the grieving father; Jason Rojas, reveling in the opposite roles of the bride's spurned and moody lover and her spoiled rich boy brother; James Cada, almost unrecognizable in his three roles of the Swedish Ice Palace guard, the father of the bride, and the gruff police chief; and Stephen Cartmell, deliciously creepy as the cross-dressing burglar and mysterious as the ice sculptor.

The stage is mostly empty, surrounded by a scroll frame, with images that look like book illustrations projected on a screen at the back of the stage to set the scene. There are some creepy cool effects in this murder mystery, and a charming sled (scenic design by Lance Brockman). Amy B. Kaufman's period costumes are lovely, especially the hats worn by the would-be bride.

Despite the opening night set-backs, Sherlock Holmes and the Ice Palace Murders is a smart, funny, and entertaining mystery, with plenty of local references and jokes. The audience also seemed to enjoy the references to other Sherlock Holmes stories that I didn't get, not being a huge fan of the series. If you're a fan of Sherlock Holmes, or if you're looking for a light and fun summery mystery (set in the winter), you might want to check this one out (continuing through July 26).


Sherlock Holmes and the Ice Palace Murders from Park Square Theatre on Vimeo.