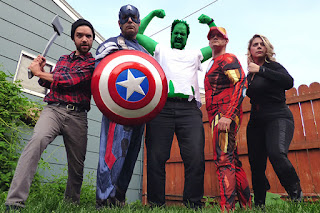 Summary: A bunch of average people become superheroes that save the day.

Highlights: The Averagers is one of the funniest shows I saw at the Fringe this year. The premise is pretty ridiculous - a ragtag group of superheroes including Captain Average (Eric Webster), the spoiled boy-god Paul Bunyan (Joshua Scrimshaw), the single mom Black Woodtick (Laura Zabel), office supply billionaire Iron Range Man (Levi Weinhagen), and the super sensitive Bulk (Matthew Kessen) travel through time and save the world from Nazis and a blue ox (Amy Schweickhardt, who wins the award for greatest range in the Fringe by also appearing in the excellent and completely different show Getting to Ellen), as told by a guy named Stanley (Daniel Hetzel). There are Minnesota references aplenty (including a "too soon?" joke about the Lindbergh kidnapping), and tons of physical comedy as the group fights and shoots things at each other. The show is incredibly loose and playful (perhaps because I saw the final scheduled performance) - everyone was ad libbing and toying with the audience and having fun, which makes it impossible for the audience not to have fun with them. And this show definitely wins the prize for best interaction with the ASL interpreter, as she (unknowingly but not unwillingly) became part of the show. The Averagers sold out all but their first show, and received the encore, and it lives up to the hype. Moral of the story: if you see "Comedy Suitcase" attached to a Fringe show, reserve tickets early and go see it, and prepare to laugh.